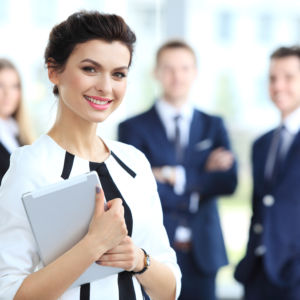 Poll Shows Women Are More Engaged With Their Work

Women are more enthusiastic and committed to their work compared to their male counterparts, according to a poll out Wednesday.

Workers who are more engaged with their jobs tend to show better productivity. They are also less likely to take days off or seek out new employment opportunities, according to research. Gallup found 35 percent of female workers are engaged at work compared to just 29 percent of male employees.

“Women bring another valuable advantage to their employers — higher levels of employee engagement,” the poll stated. “Engaged employees are involved in, enthusiastic about and committed to their work. These employees contribute to their organization positively.”

The poll adds that in total 32 percent of all employees feel they are engaged at work. Worker engagement helps greatly when it comes to empowering the individual worker and increasing company productivity. Gallup notes its importance should not be overlooked.

“And while outcomes matter, organizations often forget that engagement is also highly emotional,” the poll stated. “When employees are engaged, they work with passion and feel a profound connection to their jobs. They view their jobs as energizing and rewarding, and they like where and how they spend their days.”

Gallup notes that female workers outpacing their male colleagues on engagement is nothing new. Previous polling showed similar differences when it came to worker engagement. There are many possible reasons for the difference but job choice is likely to be a major contributor.

It also helps when a worker feels their employer is helping to meet their essential needs at work. Essential workplace needs can include getting good tools and information and feeling they are valued. Female workers are more likely to feel their company is helping to meet those needs.

Gallup found that the greatest difference in that regard is that female managers are better at helping others develop. Employees who work for a female manager are 1.3 times more likely to believe that there is someone at work who encourages their development.

“This finding suggests that female managers surpass their male counterparts in cultivating potential in others and helping define a bright future for their employees,” the poll stated. “It could signify that women are more apt than men are to find stimulating tasks that challenge their employees, thus ensuring that associates develop.”