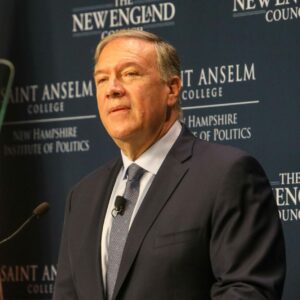 A day after reports that more than two million migrants had illegally crossed the U.S. southern border already this fiscal year — a new record — former Secretary of State Mike Pompeo called the flood of fentanyl across the border “an act of war” and another sign of the “waffling, weak” Biden administration.

And, he acknowledged, the flow of opioids from China through Mexico was viewed as so dangerous, the Trump administration considered military action across the Mexico border.

Pompeo’s comments came Tuesday at a “Politics and Eggs” breakfast at the New Hampshire Institute of Politics, a popular event among potential presidential candidates with an eye on the First in the Nation primary. Pompeo made no secret of his interest in a possible run, saying he is “doing all the things that one would do to be ready to make such an announcement.”

The theme of Pompeo’s speech was what he called the “woke, weak and waffling” Biden administration. He mocked the White House for “walking back” Biden’s statement on “60 Minutes” that U.S. troops would be sent to Taiwan in the event of an invasion by China.

“I think if I would have corrected President Trump that way, I would have been the ‘former’ 70th secretary of state,” he said.

Pompeo also called out Biden’s “divisive language” regarding Trump supporters, the president accusing them of “semi-fascism” and comparing them to racists like Bull Connor who fought against the civil rights movement.

“Mr. President, I can’t tell you what’s in your heart, I don’t know. But I do know that treating your fellow countrymen like enemies is a rejection of …what has made this country great.”

But one issue engaged him again and again: The chaos at the southern border.

During the speech, he called out Biden’s decision to reverse the Trump administration border policies, “and now illegal immigrants flood our nation streaming across our southern border.”

When he took questions, audience members asked Pompeo about the flow of fentanyl that has fed a surge in opioid overdoses in New Hampshire and across the country, with one saying, “It seems almost like an act of war.” Pompeo replied, “I’m not sure I’d use the word ‘almost.'”

Pompeo set the record straight: “That was actually me.”

“There is no governing rule. There is no sheriff, the cartels are running that space. This is deeply dangerous,” Pompeo said. “And so the story they got wrong was we were considering how we operate in an ungoverned space on our southern border. How do we prevent these folks — and this is intentional on the part of the Chinese government — how do you prevent Xi Jinping from moving these drugs into America to undermine us and put our nation decline? What are the tools we might have?

“And so we begin to think about how we might use the full range of America’s capacity to protect us from these ungoverned spaces,” Pompeo said. “Fentanyl is as cheap as it’s ever been. America’s leaders should be resolved to find a way to stop it.”

And Pompeo challenged the media to confront elected officials who claim, as members of the Biden administration have, that “the border is secure.”

“When Vice President Harris tells [reporters] ‘they’re not walking across the border,’ every one of you should say, ‘Ma’am, here’s the picture of them coming across. You are lying to the American people.’ Don’t let her gaslight the issue,” Pompeo said. “To lie to the American people about what’s actually going on there is indecent.”