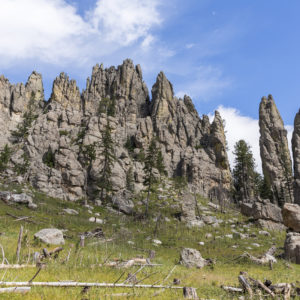 Mineral exploration and water safety are hot topics of discussion in the Dakotas just months after the Dakota Access Pipeline was completed. This time, though, uranium mining is the subject of discussion. This week, the Environmental Protection Agency hosted the first public hearings to discuss two permit applications from Powertech USA, which is looking to extract uranium from portions of the Inyan Kara aquifers located near Edgemont.

Powertech is seeking permission to use a process called uranium in-situ recovery to extract the material. This recovery method means that the company would inject lixiviant, or ground water with elevated levels of oxygen and carbon dioxide, into the aquifer to mobilize uranium from ore deposits. Afterward, Powertech will use water from another aquifer to replace the groundwater removed.

The company is confident that the science is sound and the EPA will eventually approve their proposal.

“We are very confident in our science,” Mark Hollenbeck, manager of the project site, told South Dakota Public Radio. “We have succeeded in all levels of permitting up to this date. Our science has not fell through. It has been challenged but we have won every time. So we expect to win this time as well.”

Powertech has international experience in mining, particularly for uranium. In 2014, Powertech merged with Azarga Resources to form Azarga Uranium Corporation. Although based in Canada, Azarga owns six significant mining projects in South Dakota, Wyoming, Colorado, and areas of Kyrgyzstan, where the company owns the world’s largest uranium deposit. It is also engaged in metallurgical mining in eastern Russia

“The reason why I’m here today is because the Black Hills water is under attack,” said Cheryl Angel, a resident of the Rosebud Indian Reservation at the hearing. “The people who drink water, their water, is under attack.”

Powertech’s mining proposal has encountered resistance from several area tribes, including the Pine Ridge Sioux, whose reservation is roughly 50 miles away from the proposed mine site. The tribe is a member of the Black Hills Clean Water Alliance, a group formed by several area tribes and environmental groups to resist mining in the area and to preserve clean water.

“We’ve held Azarga/Powertech Uranium off since 2010 with the help of many dedicated volunteers, grassroots allies, expert witnesses, and tribal historical preservation officers,” the Black Hills Clean Water Alliance said. “We must once again do everything in our power to protect our waters.”

The public has until May 19 to present comments on the proposal to the EPA. Thus far, the Powertech proposal has reignited a decades-long controversy over uranium mining in the area.

The history of uranium mining in the Black Hills shows that residents have reason to be concerned. Although the uranium mining boom in southwestern South Dakota ended some 40 years ago, four million tons of radioactive waste remain buried just outside of the town of Edgemont. The buried mine waste is some of lingering remnants of a Cold War-era mining boom. The boom began in the early 1950s, when the U.S. and the Soviet Union were racing to acquire massive stockpiles of nuclear weapons and the Atomic Energy Commission offered guaranteed minimum prices and cash bonuses to incentivize domestic exploration.

Uranium mining built the town, both economically and, in some cases, physically. In the 1980s, residents discovered that sand-like radioactive tailings from the mill attached to the mine had been used as fill material around house foundations. Although one family received a settlement from the Susquehanna mining company, records of the settlement were sealed out of fear that a flood of lawsuits might follow. The company went through several sales and mergers, before eventually dissolving in 1978.

When the mine was decommissioned, 60 houses in town were condemned or received significant excavation work after it was discovered that their foundations contained the radioactive fill. Removal of the tailings around Edgemont cost U.S. taxpayers what today amounts to $21 million. The EPA is continuing to study if radioactive material from the mine waste is leeching into a nearby river and surrounding creeks.

Although the debate surrounding the mining has continued for decades, the groups themselves have changed. For years, a group known as the Defenders of the Black Hills fought to preserve sacred Native American sites and to halt fracking and uranium mining in the Black Hills. The group held its final meeting in December, 2016, however, saying that it was passing the torch to other groups.