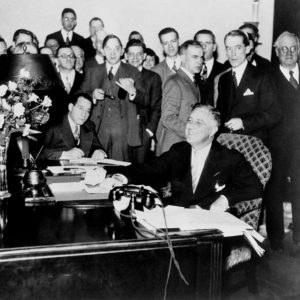 Presidents vs. The Press: It Didn’t Start With Donald Trump

A White House in open warfare with the press. A president insulting a reporter to his face. Journalists denied access to press room. The White House last week? Actually, it’s the White for at least 100 years.

The relationship between a president and the press that covers him has been rocky for well over a century, with few ups and a whole lot of downs.

Take Grover Cleveland. The only president to marry in office, he was so furious with news coverage of his honeymoon that he refused to attend the Gridiron Club’s dinner, the only president (until Barack Obama in 2009) to ever skip the annual gala since its creation in 1885.

In 1962, Look magazine carried an article by Fletcher Knebel called “Kennedy vs. the Press” that was subtitled, “Never have so few bawled out so many so often for so little, as the Kennedys battle reporters.” President Obama’s administration publicly referred to Fox News as “not a news network” and blocked them from interviews with administration officials.

And of course, journalists were prominently included in the Nixon White House’s infamous “Enemies List.”

Yet some of the nastiness moments in presidential treatment (or mistreatment) of the press came from a man famous for politically seducing reporters: Franklin D. Roosevelt.

FDR generally received glowing news coverage. But whenever he felt specific reporters were treating him unfairly, things turned ugly. And he wasn’t above engaging in knockdown drag-out brawls with them.

Like Trump, Roosevelt was a rich New Yorker who enjoyed being the center of attention. He knew how to make news, and he was a pro at it. Which helped him enjoy an extended honeymoon with the press when he moved into the White House.

But legendary charm was wearing thin by 1934. In 1935, things deteriorated into open warfare with the press. In Roosevelt’s eyes, if a reporter wasn’t for him that meant he was against him. Tough questions about his cherished New Deal were interpreted at personal attacks. And they sometimes drew savage responses that morphed into long-term grudges.

Just how savage were they? How about this: at a 1937 White House news conference, The New York Times’ Bob Post innocently asked about reports circulating around Washington that FDR planned to seek a third term in 1940. That had never happened before, and it clearly irked FDR who became visibly upset by the question. “Oh, my God,” FDR barked. He handed Post an invisible dunce cup and snapped, “Go into corner over there, put on the dunce cap and stand with your back to the crowd.” Many reporters laughed, although they privately said Roosevelt had gone too far. Post was deeply, and understandably, humiliated.

Things sank to a new low at the December 18, 1942 news conference. That was when the president stunned reporters by producing an Iron Cross medal, symbol of Germany’s Third Reich, passed it to a New York Daily News reporter and told him to forward it on to John O’Donnell at the paper. O’Donnell column’s, Roosevelt said, had earned the hated Nazi symbol by giving aid and comfort to the enemy. Yet the president’s personal feud with O’Donnell didn’t end there.

O’Donnell went on to cover the fighting in Europe. When he returned Stateside in 1945, he and another reporter had their White House credentials can celled because of their “isolationist, anti-British, anti-Russian” writing. A heated argument resulted, eventually becoming public when The Philadelphia Record reported on it.Things grew so nasty it eventually took a resignation threat from Roosevelt’s press secretary to get the men’s credentials returned. Even then, FDR did it grudgingly.

What makes the current press vs president conflict unusual is the willingness of White House reporters to engage in partisan debate with the officeholder himself. President Trump’s behavior may be a more extreme expression of previous presidential frustrations, but America has never seen a press corps so openly at combat with the Commander-in-Chief.