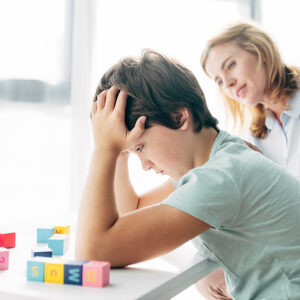 Dyslexia is the most common cause of school challenges in reading, writing. and spelling. Sadly, it’s largely undetected and therefore unaddressed in early grades.

Dyslexia is also presented as an obstacle within the prison system. Eighty percent of Texas inmates, for example, are functionally illiterate and 48 percent have dyslexia. It’s such a prison crisis that Congress passed the First Step Act in 2018 requiring all federal inmates to be screened for dyslexia.

Simple, early assessments can identify students at risk of dyslexia and sound the alarm, rather than doing nothing and expecting kids to “grow out of it.” Currently, the educational policy subtext is do nothing—wait for failure; conversely, the universal screening proposed would incentivize schools to offer earlier support and monitoring for those affected students.

Learning differences affect 20 percent of the student population. The science objectively points to early intervention as the most effective form of remediation. But if children aren’t properly diagnosed in K-3 grades, then logic would dictate they can’t be properly supported.

My experience with dyslexia is both personal and professional. My daughter was diagnosed with dyslexia late in her elementary years. We struggled and wasted valuable time trying to connect with the right type of accountable academic support. A simple evaluation in kindergarten could change the course of a student’s trajectory. Schools manage to oversee eye exams—is this wildly different?

As a result of public failings–private enterprises–like the one I co-founded–need to intervene at the behest of helpless families when the schools fail kids due to lack of widely-supported resources such as screeners.

Ask yourself: What happens to the similarly situated lower-income students? Who’s advocating for them? Who ultimately bears the cost of that student that continuously struggles with language? We all do. Students with poor language skills feel inferior to their peers, often drop out, and cannot sustain meaningful employment.

After the education disaster of COVID, unimaginable amounts of federal dollars have been greenlit and this school year is supposed to be materially different for those at-risk constituents. Schools could easily apply some of the massive funding to step up and institute what lawmakers won’t.

Notably, a bill that would require educators to screen students for risk of dyslexia sailed through the Senate. There was no vote in opposition. (when does that happen?) However, when the bill landed in the Assembly, the head of the California education committee refused to hold a hearing, resulting in a unilateral declaration of a “shoulder shrug” on the bill for this year. Senator Portantino, the author of bill SB 237, criticized the delay in a press release.

“Tabling this bill is not just out of touch with the needs of our families and the overwhelming support of Californians, it also does a disservice to the legislative and deliberative process.”

The California Teachers Association (CTA) opposed the bill in late June. Why? CTA felt the bill was overly broad and superfluous. The rationale is that assessment will lead to over-inclusiveness of dyslexia in young students, which mandates more testing and interferes with instructional time.

To be clear, we have empirical data that confirms California schools are close to bottom for literacy. So, what’s the real issue California? Your educators are now concerned that too many children will be identified with learning issues and they’ll have to (gasp!) be responsible to remediate them? If teachers are concerned about complying with state-mandated “instructional time,” wouldn’t there be any pause about the correct form of instruction?

California, you’ve let down not just your state but the entire country that looks to you to lead. You’re the birthplace of technology. And yet, here you sit—with a that’s-the-way-we’ve-always-done-it reply. This is the real health crisis facing our youth.

Better to keep the struggling students at C-level. Just enough to crush their self-esteem but not enough to fail wildly and qualify for state-funded specialist support.

But wait, there’s more! Those students that you discourage through union-first policies and push forward without foundational language skills inevitably make their way through the undisputed school-to-prison pipeline, where they’ll eventually be assessed in the prison system…for dyslexia.

It seems one way or another your tax dollars will go to assess dyslexia; the real question is far more practical and less economical. Is your preference to best support students by equitable literacy instruction for all children or attempt to repair broken souls later in life?

Maybe we should ask your governor to weigh in? After all, he’s dyslexic too.

Jen Mendelsohn is co-founder of BraintrustTutors.com, an education company that supports children with different learning profiles (Dyslexia, ADHD, Executive Function). She wrote this for InsideSources.com.