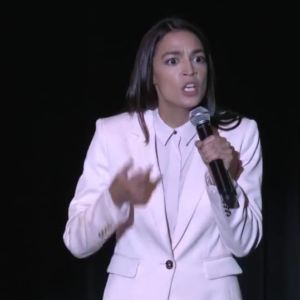 Rep. Alexandria Ocasio-Cortez speaks at a Sunrise Movement rally on behalf of the Green New Deal at Howard University in May, 2019.
News

The Green New Deal is a hot topic these days — in some cases literally.

We saw that last weekend when Bill Nye, also known as “The Science Guy,” set up a makeshift lab experiment on the set of comedian John Oliver’s HBO show. Nye took a welding torch and actually lit a classroom globe that became engulfed in flames on a lab table. Then, Nye screamed, “What I’m saying is, the planet is on (expletive) fire.”

Nye was bringing awareness to the Green New Deal, a bold initiative aimed at dealing with the negative effects of the climate-change issue.

Late Monday night, the ultra-progressive, far left side of the Democratic Party — including its star duo of socialist-leaning Alexandria Ocasio-Cortez and Sen. Bernie Sanders — didn’t use any props, but their tone supporting the Green New Deal nevertheless was fiery in its own right during a sold-out rally at Howard University in Washington.

“I am not here to tell you that all Democrats are good and all Republicans are bad and that if you simply elect someone with a ‘D’ next to their name that our problems will be solved,” Ocasio-Cortez, the controversial, but very influential, freshman Democratic congresswoman from New York, blurted to major applause and ear-popping chants of “AOC, AOC, AOC.”

She emphatically continued, “I will be damned if the same politicians who refused to act then are going to try to come back today and say we need a middle of the road approach to save our lives. That’s too much for me.”

That remark was a  jab at presidential candidate Joe Biden, who, incidentally, is leading the Democratic race by a wide margin in most polls. Reuters, using unnamed sources, recently reported that Biden preferred a “middle ground” approach to climate-change policies, apparently in an effort to bridge the chasm between liberal environmentalists and blue-collar voters.

Ouch! This appears to be another example of the fissures between the progressive left (Ocasio-Cortez) and the center-left (Biden) in the Democratic Party.

Though Ocasio-Cortez never mentioned Biden, who reportedly will soon announce his climate plan.

Biden, speaking to reporters from a restaurant in Concord, N.H.,  late Tuesday morning, responded to Ocasio-Cortez’ comments, saying,  “You never heard me say middle of the road. I’ve never been middle of the road on the environment. Tell her to check the statement (in 1987, two years before AOC was born) that I made and look at my record. Nobody has been more consistent in taking on the environment and the ‘Green Revolution’ than I have.”

Ocasio-Cortez and Sanders were the marquee names who spoke during the final stop of the Road to the Green New Deal Tour, which previously spread its message in such cities as Detroit, Los Angeles, New Orleans and Frankfort, Ky. The Tour, sponsored by the Sunrise Movement, was designed to bring attention to the three key aspects of the Green New Deal (GND), which was introduced three months ago by Ocasio-Cortez and Democratic Sen. Ed Markey of Massachusetts.

The three components of the GND: climate change, racial justice for people of color and the jobs economy.

The GND plan essentially advocates life-changing steps with wide-ranging goals that include major reductions in emissions; livable wages in a new economy focusing on renewable energy jobs, such as in the wind turbine and solar-panel industries; improved health care; and elimination of fossil-fuel use.

The GND has been ridiculed by some Republicans and prominent talk-show hosts on Fox News, namely Sean Hannity, Tucker Carlson and Laura Ingraham, as being too expensive, too radical, too eco-socialist.

In fact, according to The Heritage Foundation, the Green New Deal, as outlined by Ocasio-Cortez, would be fiscally and economically catastrophic for American families and businesses — all for no meaningful climate benefit.

Kevin Dayaratna, a senior statistician and research programmer, and Nicolas Loris, deputy director of the Thomas A. Roe Institute for Economic Policy Studies for the conservative Heritage Foundation, recently wrote a commentary breaking down that “catastrophe.” According to the Heritage Energy Model, as a result of the taxes and carbon-based regulations, by 2040, the GND will cause:

—A peak employment shortfall of more than 1.4 million jobs,

—An aggregate gross domestic product (GDP) loss of over $3.9 trillion,

The fast-growing Sunrise Movement, which boasts about 250 hubs in cities across the United States, also announced three demands on 2020 presidential candidates on this night:

—Sign a No Fossil Fuel Money pledge (as in don’t accept any campaign money from oil, gas, coal companies).

— Make the Green New Deal a priority from Day One.

—Agree to a primary debate devoted solely to climate change.

The movement set a deadline of hearing from the candidates by July 30, the date of a Democratic debate in Detroit, to be televised by CNN.

The demographic contrast of this GND event can’t be overlooked. Of the more than 1,500 attendees, probably 95 percent were young, white millennial-type activists and concerned citizens under the age of 40. The irony is that the Green New Deal has a clear racial component designed to help people of color, especially black Americans, many of whom live in environmentally unfriendly areas in the United States pockmarked by waste dumps, tainted water and air pollutants.

However, there probably weren’t more than 25-30 black citizens — including middle-school and high-school students — in the long lines waiting to enter Cramton Auditorium on a cool, damp night at Howard, a historically black college whose spring semester ended last weekend with its graduation ceremony.

That’s why there was little movement on Howard’s campus other than the Sunrise Movement’s raucous rally supporting a green new world.

Trevor Rogan, a 22-year-old graduate of St. Louis University in the Class of 2018, was the epitome of the rally attendees. He started a new position in September at the Center on Budget and Policy Priorities, a progressive think tank in Washington.

Wearing an Alexandria Ocasio-Cortez T-shirt on this night, he spoke about the most important political issue topping his priorities. “Climate change is the biggest issue of our time,” Rogan explained. “Education and health issues can be solved. But we can’t solve those problems if we don’t have a planet.”

Though the audience appeared not to reflect the racial makeup of Howard’s campus, the dais featured a stout collection of black speakers, including organizer Judith Howell, who spoke on behalf of working-class folk concerned about our environment. “We believe that working people can and must be involved with the process of reversing climate change,” said Howell, a member of the Service Employees International Union.

She added a catchy phrase, “The greedy never care about the needy.”

However, some unions have expressed fear that the Green New Deal would cost their constituencies major job losses and some are skeptical of this GND phrase — “just transition,” which means a call for the retraining of fossil fuel workers, with added amenities such as guaranteed health care and jobs.

“We will never settle for ‘just transition’ language as a solution to the job losses that will surely come from some of the policies in the resolution,” Yvette Pena O’Sullivan, executive director of the Laborers’ International Union of North America (LIUNA), whose members work in construction and other industries, told Reuters in February.

And Phil Smith, a spokesman for the United Mine Workers (UMW), which represents workers in the coal industry, offered similar sentiments.

The rally’s program included testimonial videos from citizens still dealing with the nagging reality of the after-effects caused by sweeping wildfires and contaminated water, dangers that some have attributed to climate change and environmental neglect.

Note that Chicago last month became the largest city in the United States to commit to 100 percent clean energy as its city council unanimously passed legislation for the cause. The bill, signed by Mayor Rahm Emanuel, calls for all of its buildings to be powered by clean and renewable energy by 2035 and its Chicago Transit Authority, the nation’s second-largest public transportation system, is set to completely electrify its city buses by 2040.

At one point, audience members at the Sunrise rally were implored to ask their seated neighbors this question: “What are you fighting to protect?”

The answers later were recited aloud; they ranged from “clean air” to “oceans” to “refusing corporate money” to “my life.”

Perhaps Sen. Markey delivered the most rousing speech of the night when he remarked with much vigor, “solar power, wind power, clean energy, good jobs. Well, if that’s socialism, then give us some of that socialism.”

The response: another standing ovation, which was common at this event.

Sanders, greeted by chants of “Bernie, Bernie, Bernie,” stated that Big Oil was comparable to Big Tobacco from decades ago. Accusing both entities of lying to the public, Sanders asked passionately, “How do we take on an industry with unlimited power, money and resources? We need a political revolution.”

He then pleaded with the young folk in the audience to vote, saying the 30-and-under age group tends to exercise its rights at the polls at a far less rate than older Americans, which ultimately will chip away at the GND agenda. At that point, a young audience member squealed for all to hear, “We would have voted if you were there.”

Later, Ocasio-Cortez closed the night to a stirring ovation, when she declared, “People will vote if there is something worth voting for.”

Afterward, Danielle Delgado, a student from Arizona State, summarized the two-and-a-half hour pep rally this way: “It was fantastic, more fantastic than I would have ever believed.”

That assessment likely reflected the sentiments of the young masses in attendance.