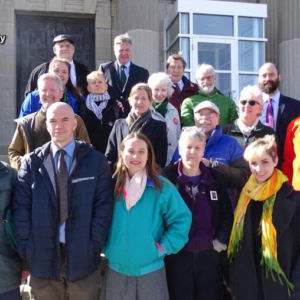 Last winter, a cold snap across most of the country pushed utilities into their fuel reserves as consumer demand for energy surged on cold, short, windless days. Meanwhile, the Northeast was pushed to burning fuel oil and imported gas, since it lacked pipeline connections that could have supplied it domestically. Establishing secure supplies of natural gas has proven difficult, as environmental groups continue to resist pipeline construction. A potentially new angle of legal defense for protesters opened up this week when a Massachusetts judge ruled that protesters could use the “necessity defense” as a justification for their actions.

On Tuesday, 13 environmental protesters appeared in West Roxbury District Court, charged with trespassing and civil disobedience for actions they took to try to prevent work on Spectra Energy’s West Roxbury Lateral pipeline in 2016.

“The defendants asked for an opportunity to explain their motivations, to explain all of the other things that have been attempted to end this project in particular, all of the legal remedies that were attempted by the city council, by the mayor, by other agencies, that were unsuccessful and they asked for the opportunity to explain to the court what motivated them and what required them to take the action that they took,” explained Josh Raisler Cohn, one of the attorneys representing the defendants, after the decision.

According to Cohn, the judge then found that their actions were justified and there was no criminal liability. Under the necessity defense, defendants admit to wrongdoing, but argue that their actions were the only means of avoiding an otherwise catastrophic threat. The application of the argument to climate change had been discussed, but not implemented before.

Even in this instance, District Court Judge Mary Ann Driscoll did not hear the full necessity argument. Instead, she allowed each defendant two minutes to explain their actions and the reason why they took them. She then made her decision in court. Since then, neither she nor the court clerk have made comments to the press about the case.

Environmentalist groups hailed the decision as a sign of judicial approval of their argument.

“We believe this is a first,” Marla Marcum, director of the Climate Disobedience Center, told ThinkProgress. “It’s pretty powerful, to us, that a judge listened very carefully and determined, essentially, that it was necessary for these people to take this action in an attempt to prevent a greater harm.”

Karenna Gore, daughter of former vice president Al Gore and one of the defendants, agreed.

“What happened today was really important,” she said. “Essentially, the people that put themselves in the way of building this fossil fuel pipeline were found ‘not responsible’ by reason of necessity. The irony of that is that we are making ourselves responsible. We are part of the the movement that is standing up and saying we won’t let this go by on our watch. We won’t act like nothing’s wrong.”

However, it seems to be little more than a symbolic strategic victory. Full use of the necessity defense in a legal trial would have required the defendants to argue both the harms of the pipeline and that normal legal and political means were inadequate to address the threat. This would have been the situation if the case went to criminal trial.

Judge Driscoll’s decision on the necessity defense prevented a discussion on whether the argument would have to be included in jury instructions. Thus far, there have been no climate-related trials in the United States where jurors were told to consider necessity when making their decision. Instead, prosecutors reduced the defendants’ charges from criminal misdemeanors to civil infractions. At this level, a jury trial is not necessary.

For the past several years, America has been in the midst of an energy infrastructure building boom. Pipelines are being built to connect the shale oil fields to refineries and processing plants around the country, as well as to provide fuel for electricity generation. These pipelines allow for a consistent supply of fuel, relieving many of the fuel supply concerns that had made utilities hesitant to shift from coal to natural gas for generation. Pressure from environmentalist groups has kept most pipeline construction out of new England, though, leaving the region subject to fuel supply shortages in times of increased energy use.