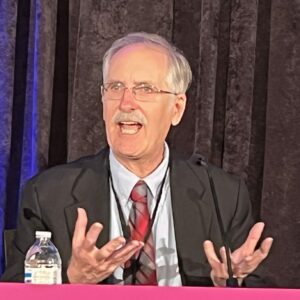 An enhanced focus on mental health among the nation’s adolescents may provide inroads to stemming vaping among youths, according to mental health professionals at a summit on electronic cigarettes in Washington, D.C. Tuesday.

Participants ranged from representatives of the Food and Drug Administration (FDA) to vape shop owners. A significant part of the event was dedicated to youth vaping. The overall conclusion: The desire to achieve the impossible — zero vaping among young people — should not prevent a public health strategy that achieves positive goals, such as fewer users of traditional cigarettes.

“We’d prefer not to have kids on the continuum of risk, but we recognize that’s not possible,” said Kathleen Crosby, director of the Office of Health Communication & Education for the FDA Center for Tobacco Products. 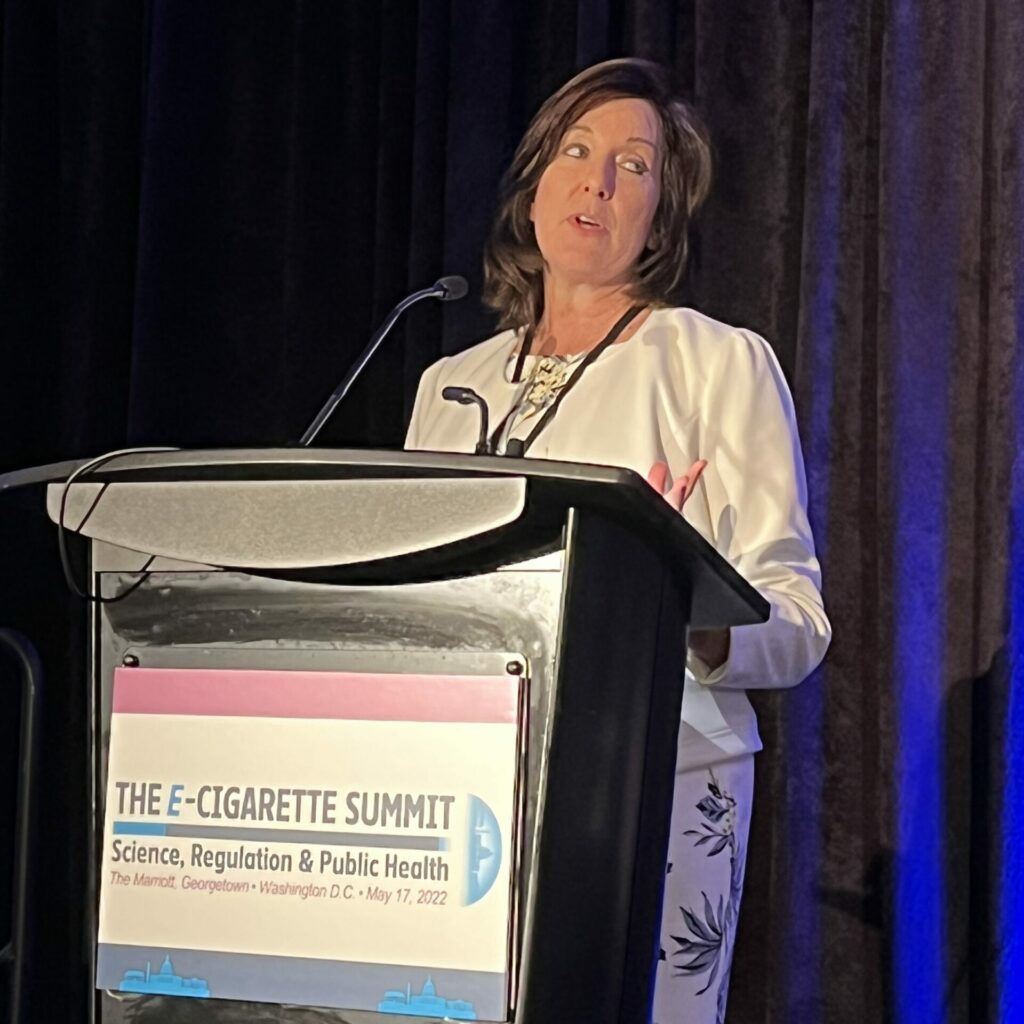 Kathleen Crosby of the FDA Center for Tobacco Products addresses the 2022 E-Cigarette Summit in Washington, DC.

The FDA started researching e-cigarettes in 2016 and teen vaping specifically in 2017. An estimated two million U.S. teens currently use e-cigarettes. About 10.7 million youth are considered at-risk for or already trying these products, according to information given at the summit.

“Teens are looking for a fun, engaging, sophisticated experience that has little or no cost associated with it,” Crosby said.

But she and other experts made clear that vaping and e-cigarettes are not zero-risk products, though teens tend not to have a realistic view. In 2017, FDA research found just 30 percent of teens believed e-cigarettes posed any kind of risk and 79 percent thought vaping caused little or no harm.

The muddled messages around various substances such as alcohol, cannabis, and smoking products make it difficult to convey harm, said Kevin Gray, professor of Psychiatry and Behavioral Sciences at the Medical University of South Carolina. Conflicting messages can be simultaneously true, such as e-cigarettes being “relatively safe and benign for some people” and that vaping can help some people stop using tobacco products.

“You lose the message if you go too strong in either direction,” Gray said.

At the same time, said Clive Bates of Counterfactual Consulting, there is a mismatch in American public health policy between the minimal risk young people face from vaping, and the very significant risk to older smokers from continued use of combustible cigarettes.

“Someone who smokes and is in their 40s or 50s is at serious risk to their health,” Bates told InsideSources. “So if you can get that older smoker to switch to vaping, you can get a big health win.

“On the other side of the equation is a relatively small risk of a 16-year-old at a party puffing on a vape and being silly. It’s what kids do. We can try to regulate e-cigarettes but we can’t ban teens from acting like teens.”

Like much of teen behavior, there is far more experimentation with e-cigarettes than there is lifestyle adoption.

Not every adolescent who experiments with substances will need abuse assistance, and it’s important to avoid finger-wagging and condescension when talking with teens.

“Whether or not they’re listening, they’re hearing you,” Gray said.

Few public health professionals dispute that getting adult smokers who are not going to quit to switch to a non-combustible product will lower health risks. However, critics of the vaping industry argue there is a significant difference between selling a product to adults that young people might access and abuse, and marketing vaping products directly to underage consumers.

Jennifer Pearson, an associate professor in Health Administration and Policy at the School of Public Health, University of Nevada at Reno, accused some companies of directly targeting teens.

Pearson called out Puff Bar, which reintroduced its disposable e-cigarette in early 2021, describing it as being made with a “patented manufactured process not from tobacco.” On its website, Puff Bar advertises its product as a one-step system that is “always ready when you are.” The cartridges are available in a multitude of flavors such as Aloe Grape, Banana Ice, Black Cherry Ice, Kiwi Strawberry, and Mango Peach Watermelon.

“You can’t tell me this isn’t directed to kids,” Pearson said in an interview with InsideSources. “Those are really bad actors. They give zero [expletives]. There’s no reason to be marketing to kids.”

An August 2020 survey from the International Tobacco Control Policy Evaluation Project found Puff Bar had replaced JUUL as the e-cigarette of choice for teens and young adults among those who had smoked for more than 30 days. Puff Bar held a slight edge over JUUL among vape users ages 16 to 19 of 24 percent to 21 percent.

Developing and delivering messages that resonate with youth, though, can be tricky.

“We try to be as clear as possible that vaping is less harmful but vaping alone is not benign,” Crosby said. “Safer for a smoker doesn’t mean safe for someone who’s never used a tobacco product.”

“Youth is a time of experimentation and risk-taking,” said Robin Mermelstein, a nationally recognized expert on youth tobacco use.

She recommends taking a realistic approach to adolescents using tobacco and vaping products, acknowledging that teens are looking for autonomy in decision-making instead of being told what to do. Instead of an “all or nothing” approach, create prevention and cessation programs that are flexible, tailored, and accessible. She also warned against making e-cigarettes harder to access than tobacco products.

Bates was blunter: “The public-health priority should be adult smokers, not young vapers.”