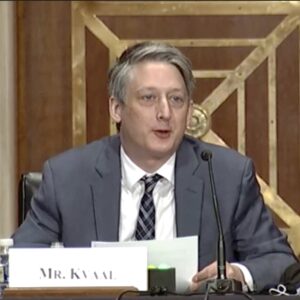 One of them is Sen. Elizabeth Warren, the Massachusetts progressive who is blocking Kvaal’s nomination over his reluctance to support expansive student loan debt.

Shireman is the founder and former president of The Institute for College Access and Success (“TICAS”), an organization that lobbies Washington over education policy. Like Shireman, Kvaal served as TICAS president. The two worked together in the Clinton administration, and when Shireman left his job as Deputy Undersecretary of Education in the Obama administration, he was replaced by Jim Kvaal.

And when the Department of Justice investigated allegations of inappropriate contacts between Education Department officials and short-sellers on Wall Street, Shireman and Kvaal were both put under the microscope.

“While at Education, Mr. Shireman led the agency’s regulatory effort of the for-profit education industry, and questions were raised about his potential conflicts of interest because of his former involvement with a nonprofit education entity,” the left-leaning government watchdog group Citizens for Responsibility and Ethics in Washington (CREW) wrote in a 2011 complaint. “Mr. Kvall has taken over Mr. Shireman’s role, and publicly available documents suggest he too may have been influenced by outside groups.”

At issue were drastic changes in the stock values for some large, for-profit college companies like Corinthian College and ITT Tech. The investigation, as The Wall Street Journal reported in 2013, was extremely serious and lasted for several years.

In the end, neither Shireman nor Kvall were charged with a crime. And the stocks of the career college companies were so volatile at the time it’s impossible to say if the information Shireman or Kvall were found to have handled would have made any difference.

And the reason for that volatility in career-college stocks?

“I have never met a person who, when his name was first presented by the Obama administration for a government office, sent the price of common stock of an entire industry down by the better part of a billion dollars in one day,” said economist Richard Vedder. “I told Bob Shireman that to his face.”

Vedder served on the Spellings Commission on the Future of Higher Education, ran the Center for College Affordability and Productivity, and spent years administering the Forbes’ Best Colleges rankings.

And, unlike Shireman and Kvall, he believes there’s a place for for-profit colleges in the American education system.

For-profit, or career colleges as they’re sometimes known, are essentially education businesses. Some, like ECPI and Strayer, are large and well known. But most are small, often family-owned businesses that teach their students skills from welding to hairstyling to over-the-road trucking. Still others focus on providing college and graduate degrees to nontraditional students such as military veterans.

Career college students qualify for federal aid, including VA benefits and student loans, and Shireman is part of a group that has spent two decades trying to end those students’ access to these education funds.

Vedder has written extensively about the career college sector for years. “There have been some bad apples in the past, yes. But the for-profit industry was doing something that no one else was,” Vedder said. “They were specializing in reaching out to low-income groups, minorities, first-generation college students, and so forth. They were at the leading edge of expanding access.

“You know, everyone was saying, ‘We need to have greater minority participation in higher ed.’ Well, who’s actually doing it? The for-profits. And then they get maligned by the Shiremans of the world.”

To say Shireman has been extreme in his opposition is, in the view of many in the industry, an understatement.

“He’s part of the academic Taliban – ‘It’s my way or the highway,’” says Vedder.

Dr. Jason Altmirme, a former Democratic member of Congress and president/CEO of Career Education Colleges and Universities (CECU), is far more measured in his comments. “It’s just bewildering,” he said of the adamant opposition to the schools he represents.

So, why are organizations like TICAS and education insiders like Shireman and Kvaal so adamantly opposed to the career college choice?

“I believe they have an ideological opposition to for-profits,” said Neal Heller, president and CEO of the Hollywood Institute of Beauty Careers, an opinion shared by many in the industry.

However, several sources inside the for-profit community also raised the issue of the short-sale investigation and financial considerations as well, though they were unwilling to do so on the record. Several mentioned the aggressiveness of Shireman and his associates, in particular attorney David Halperin, as a reason for their reluctance to be quoted. (Halperin also receives funding from TICAS.)

Shireman declined to be interviewed for this article.

CREW, generally an ally of Democratic administrations, pushed hard for disclosure and raised serious questions in the wake of Shireman’s replacement by Kvaal. If Mr. Shireman “continued to serve the interests of TICAS, his former employer, while he was at Education, that would present a clear conflict of interest,” said CREW’s chief counsel at the time Anne Weismann.

Burr also raised issues from the investigation of Kvaal and Shireman. “Official emails being sent to and from private email [accounts], close collaboration with short sellers on market-moving information, and an administration official using his old advocacy organization [TICAS] and their emails to try to hide this from public scrutiny in furtherance of partisan objectives.”

“Noting that no charges were ultimately filed,” Burr added, “I’m going to give you the benefit of the doubt.”

Given the public record, how many senators will do the same?