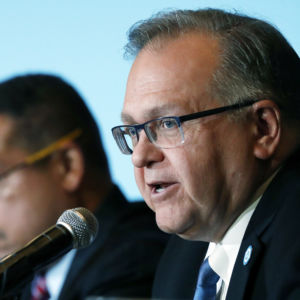 FILE - In this Dec. 2, 2016 file photo, Ray Buckley, right, chair of the Democratic Party of New Hampshire, addresses a forum on the future of the party during a session of the Association of State Democratic Chairs in Denver. As head of the New Hampshire Democratic Party, Buckley has turned the state from a "political graveyard" for Democrats to a place where Democrats can withstand national Republican waves. (AP Photo/David Zalubowski, File)
News

Where Does NHDP Chairman Ray Buckley Fit In With DNC Reform?

After an unsuccessful run for chairman of the Democratic National Committee, Ray Buckley wants to change the way the national party does its elections–yet how much influence and power he wields in the new DNC leadership is still largely unknown.

In an email to DNC members, Buckley, the chairman of the New Hampshire Democratic Party (NHDP), laid out his proposal on how to improve campaigns and elections for officers in the coming years. He noted that an impressive $4 million was spent in the DNC chairman’s election, an unprecedented number of candidates ran, and the race was in the national spotlight in a way that it hasn’t been in the past.

“It is likely that the level of interest we saw this year will continue, and so it is a good time to examine whether any reforms or changes could improve the process, while insuring more fairness, accountability, and transparency,” he wrote.

His proposal includes campaign finance limits and full disclosure of receipts and expenditures. He suggested limiting contributions to $500 per donor and not accepting any “dark money.”

“As the party that opposes big money and corporate money in politics, I also would limit donations to individual donors, labor, and progressive organizations,” he wrote. “No donations from any business, corporation or their PAC [political action committee] or lobbyists would be permitted.”

He would also forbid DNC employees, consultants, or even employees of consulting firms that do business with the DNC from publicly or privately supporting a candidate for DNC officer.

WMUR was the first to report about Buckley’s plan.

It’s not immediately clear if any of his proposals would be implemented under the new DNC order.

Despite having the most party leadership experience of the lot, he was still a dark horse candidate. Buckley was vice chair for the DNC and president of the Association for State Democratic Chairs (ASDC), which led him to have many voting members as friends and allies.

The two frontrunners, Minnesota Representative Keith Ellison and Tom Perez, labor secretary under President Barack Obama, stole the headlines at the various debates and forums. It was essentially a Clinton versus Sanders match up again, since Ellison backed former Democratic presidential candidate Bernie Sanders and Perez was a supporter of Democratic presidential nominee Hillary Clinton.

Buckley eventually dropped out of the election, shortly before the DNC chair vote in February, endorsing Ellison for the post. Ultimately, Perez won the chair and made Ellison a deputy chair.

The DNC chair race revealed deep wounds for the Democratic Party, which still had not healed from the hotly contested battle between Sanders and Clinton for the presidential nomination. Some Democrats claim the DNC favored Clinton when it was supposed to be neutral. The Wikileaks emails didn’t help the cause, revealing that former DNC chairs Debbie Wasserman-Schulz and Donna Brazile coordinated with the Clinton campaign during the primaries.

After his victory, Perez vowed to heal the party and bring a unified Democratic Party to defeat President Donald Trump’s agenda and beat Republicans in the 2018 midterm elections, but Buckley’s role in the national party has changed since he ran for the chairmanship.

He’s no longer a vice chair for the DNC and there is a new president for the ASDC, with Buckley’s position now listed as “president emeritus.” Although Perez made Ellison a deputy chair after the close election between the two, the position is largely symbolic and doesn’t have any official duties. Even though Buckley backed Ellison, and Ellison has a prominent position, it’s not clear if their agenda would be enacted.

Ellison was recently in New Hampshire for his first public appearance as deputy chair at the NHDP’s state committee meeting on March 25, where Buckley was reelected as state party chairman for a sixth term. Ellison and Buckley argued that the party has been too focused on the White House and not enough on the state legislatures and governorships.

“We’ve got to have a higher vision than just winning an election,” Ellison said. “When we set our sights as really agents and champions for the American people, people start feeling the flow.”

On top of that, Perez is launching a major overhaul of the party’s organization, requesting resignation letters from all current staffers. While it’s usually routine to see major turnover under new leadership, the mass exodus allows Perez to completely rebuild the DNC and determine how it should be structured in the future.

“It sounds good if you’re looking for change, but it’s not what people were clamoring for,” said liberal New Hampshire radio host Arnie Arnesen to The Boston Herald about the DNC shakeup.

“They weren’t angry at the people working within the base of the Democratic Party. They were furious with the leadership. I’m not sure that gets us to the goal,” she added. “I think it hurts a lot of little people. Is that what the Democratic Party is supposed to be known for?”

As for Buckley, it looks like he’s going to be focused on New Hampshire for a while. He’s going to focus on strengthening local communities and grassroots ahead of 2018, with the hopes of flipping the state legislature and taking back the corner office. Will he, or his platform, still be heard up the ranks at the DNC, though? Only time will tell.

“With all that we’ve accomplished, 2016 is a prime example of why we cannot afford to rest on our laurels,” he wrote in a Monday op-ed for the New Hampshire Union Leader. “We know that our economic and social progress means Democratic ideas are working, and our electoral success shows Granite Staters understand that. But we need now more than ever to put our nose to the grindstone and keep fighting.”