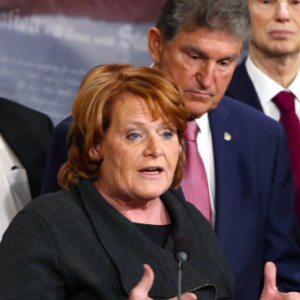 While Democrats push their latest attack on Judge Brett Kavanaugh–he has a drinking problem–it turns out they may have problems of their own:

National polls show Americans are fairly evenly split on the issue of confirming Judge Kavanaugh, with voters falling largely down partisan lines. But as Democrats were reminded in 2016 when Hillary won the popular vote but lost the presidency, America doesn’t have “national” elections. We have 50 local ones. And new numbers show that, in a 51-49 GOP Senate where every vote counts, some red-state Democrats are on the wrong side of the Kavanaugh debate.

In Missouri, Sen. Claire McCasklill says she’s a solid “no” vote. But her GOP challenger Josh Hawley is gaining, and a new poll shows that 49 percent of Missouri voters are less likely to vote for her after watching the Kavanaugh confirmation process.

And in Indiana, where Democrat Joe Donnelly supported President Trump’s first SCOTUS pick, Neil Gorsuch, polls show two things: Donnelly is in a neck-and-neck race with his Republican opponent, Mike Braun;  and Indiana voters support the confirmation of Brett Kavanaugh (though there are no public polls taken after Dr. Ford’s testimony).

For these red-state Democrats, whose voters overwhelmingly backed Donald Trump in 2016, and who are being targeted with TV ads from pro-Kavanaugh groups today, national polls like the Quinnipiac poll showing Americans breaking 48-42 against Kavanaugh are cold comfort.  The angry liberals of Massachusetts and Manhattan won’t be voting in Bismarck, ND or Bloomington, IN this November.

When President Trump travels to West Virginia and tells his supporters “A vote for Judge Kavanaugh is also a vote to reject the ruthless and outrageous tactics of the Democrat Party”—it matters.

One final problem for these Democratic politicians: Polls also indicate that, while the Kavanaugh fight is a loser for the GOP overall, it is doing something no other issue has done: Pumping up the Republican base in time for the midterms.  Anti-Trump sentiment had already pushed Democratic passions sky high, while GOP enthusiasm lagged.  Not anymore.

“Sixty-one percent of Democrats and Democratic leaners and 58% of Republicans and Republican leaners say they are more enthusiastic about voting in November compared to prior elections. These levels roughly match Republicans’ record-high enthusiasm in 2010, Barack Obama’s first midterm, when the GOP won a whopping 63 seats,” according to Gallup.

In swing states like New Hampshire and Virginia, Democrats can count on increased turnout from their base to offset any GOP surge. But in Republican states like North Dakota and West Virginia, there just aren’t enough Democrats to go around.

According to reporting at The Hill, Democrats declining hopes of defeating Kavanaugh’s confirmation have come down to waiting for the judge to withdraw his own nomination.  “One Democratic senator, who requested anonymity, said there’s hopeful talk within the Senate Democratic caucus that Kavanaugh will drop out,” The Hill reports. Another anonymous senator reportedly said “I just had a conversation with a colleague who said they couldn’t believe he hasn’t dropped out yet.”

There’s still one last hope for a red-state rescue: The Republicans. If two of the three fence-sitting GOP Senators— Collins, Flake or Murkowski—bail on Brett Kavanaugh, Democrats will dodge a bullet.  Unfortunately for them, Sen. Flake said Saturday that he’s still a “yes” vote unless the FBI finds some evidence to corroborate the accusations against Judge Kavanaugh—a position he reiterated Monday night during a speech in New Hampshire.

So, will red-state Democrats risk their senate seats in service to their party? Or will they do what politicians always tend to do: Whatever it takes to get re-elected.