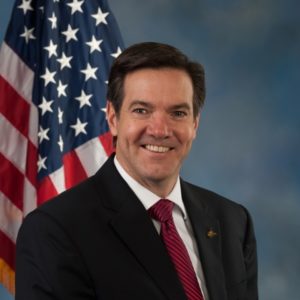 Rep. Evan Jenkins Is Optimistic About West Virginia’s Swing to the GOP

For decades, West Virginia was a reliably Democratic state. That began to change in 2000, when Al Gore was stunned to lose the state to George Bush. Since then, the trend has not only continued, but accelerated. By 2016, Donald Trump’s margin of victory was more than 42 points. West Virginia’s presidential voting patterns have changed, but its representatives at both the state and local level remain surprisingly Democratic. That discrepancy has turned the state into a must-win for Republicans heading into the 2018 midterms. Democratic Senator Joe Manchin is up for reelection in 2018 and observers from both parties see his seat as vulnerable. Speaking at a retreat for Congressional Republicans hosted by the Congressional Institute, Rep. Evan Jenkins spoke hopefully about continuing West Virginia’s swing to the right.

“When you have the last eight years of the Obama administration, that really had a liberal ideological agenda and really an anti-fossil fuel agenda with the war on coal putting a target on our back as an energy state,” he said.  “He decimated our economy.”

The Obama administration’s policies to reduce carbon emissions put thousands out of work in West Virginia, a state whose economy has traditionally relied heavily on coal.

“People are pretty mad about it,” says Jenkins, who also describes the Democratic Party’s social policies as another tough fit for many West Virginians. “They see the liberal direction of the Democratic agenda whether it be the Pelosis and Schumers in Washington or the leadership at the state capitol.”

West Virginia’s state government had been fully controlled by Democrats from 1992 to 1996 and again from 2001 to 2014. In 2014, the state’s house passed into Republican control for the first time since 1930. Republicans gained control of the state senate after one member switched party affiliations. And the state’s governor, Jim Justice, announced that he was leaving the Democratic party this summer.

All these developments leave Sen. Manchin in a lonely position as one of the last Democrats holding state office. The upcoming campaign will be unusual, however, because registered Democrats still outnumber Republicans by more than 11 points as of December 2017.

Jenkins believes that that official party affiliation will matter little in the election, pointing out that he defeated a 38-year incumbent in 2014. The congressman he defeated, Democrat Nick Rahall, was the second-longest-serving member defeated in a general election. At the time, registered Democrats outnumbered registered Republicans by a two-to-one margin.

During President Trump’s State of the Union speech, Manchin’s reactions were closely observed, particularly after he criticized fellow Democrats for refusing to stand. For Jenkins, this shows how the Democratic Party has strayed further and further to the left, making it difficult for West Virginia Democrats to continue to remain in step with West Virginia voters and the national party’s politics.

“If you go back a number of years there used to be code for a West Virginia Democrat trying to separate themselves from the national liberal Democrat agenda. When you look at the last decade there have been a lot of Democrats who have been pro-life and pro-Second Amendment, and pro-coal at the state house that was out of step with the national Democratic Party platform,” Jenkins told InsideSources.

Manchin, who voted against the GOP’s tax plan, increasingly seems out of touch with the issues that matter to voters in West Virginia. This values clash may be the chink in the armor of the union-Democrat alliance that has held for decades.

“A decade ago, coal miners in West Virginia may have voted in large numbers [for] Democrats, but they see that the liberal Democratic platform… doesn’t reflect our values,” said Jenkins.

Before he can face Manchin in a direct race, Jenkins faces a crowded Republican field in the primary. As of the filing deadline, January 27, a total of five candidates are running for the GOP nomination. They include State Attorney General Patrick Morrisey, along with businessmen Don Blankenship, Bo Copley, Scott Ernst, and Jack Newbrough.