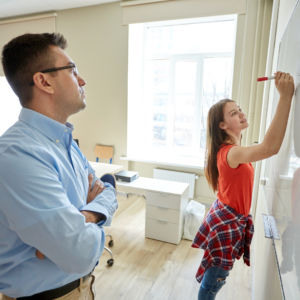 Report Finds That Teacher Evaluation Efforts Have Been Successful in D.C.

A controversial high stakes teacher evaluation system that included financial incentives for high performing teachers has been shown to be successful in improving teacher quality and boosting academic performance in Washington D.C.’s public schools, according to a newly released report. Teacher evaluation is a fraught topic for many education policy wonks. Educators have long complained that the instruments used to grade teachers are too blunt, too subjective, and often are unfair to those working with difficult-to-educate students. Nevertheless, the findings that teacher quality can be improved through a well-designed evaluation system could reinvigorate the efforts of education reformers who argue that they are essential for improving student performance.

The analysis of Washington D.C.’s teacher evaluation system was published in Education Next by Thomas Dee, a professor at Stanford, and James Wyckoff, from University of Virginia. The researchers examined the effects of an evaluation system called IMPACT, which was first introduced by former education chancellor Michelle Rhee in 2009. Dee and Wyckoff studied the program to see how it affected which teachers were retained by the school system, who replaced the teachers that left, and how student achievement was impacted.

In the first few years after the evaluation system was implemented, “DCPS dismissed the majority of very low performing teachers and replaced them with teachers whose students did better, especially in math. Other low-performing teachers were 50 percent more likely to leave their jobs voluntarily, and those who opted to stay improved significantly, on average, the following year,” according to the report.

Though the program has changed since its implementation, the evaluation system is fundamentally based off of a series of in-class observations coupled with “value added” or student growth measurements for those teaching core subjects like reading and math. The teachers are then sorted into categories, ranging from “Ineffective,” “Minimally Effective,” “Effective,” and “Highly Effective.”

While only 2 percent of teachers were rated “Ineffective” during the first years of the program, 95 percent of those teachers were fired from the school system. According to the researchers, the educators who came in and replaced those ineffective teachers then went on to outperform their predecessors on subsequent evaluations. Furthermore, the 14 percent of teachers rated “Minimally Effective” were far more likely to be dismissed or to leave voluntarily than their higher-rated peers. Those with low ratings that stayed within the system, went on to improve on subsequent evaluations, according to the Education Next report.

Meanwhile on the other end of the spectrum, the researchers found that teachers on the cusp of being ranked “highly effective”—and therefore becoming eligible for cash bonuses—also improved their performance notably on subsequent evaluations. The analysis therefore appears to suggest that if financial incentives for teachers are big enough (in Washington some teachers earn bonuses as large as $27,000), they can be used to motivate self-improvement. In the past, some, particularly on the left, have argued that merit pay is an ineffective strategy for incentivizing educators.

Teacher evaluation systems can also morph into politically sticky issues as well. Rhee resigned her post after her close ally, D.C. mayor Adrian Fenty, lost re-election in 2010. Some attribute Rhee’s hard-charging education reforms to the collapse of Fenty’s administration. In Dana Goldstein’s book, “The Teacher Wars,” high stakes evaluation systems are linked to a spike in cheating on standardized tests, and to grumblings from principals and administrators about rising piles of paperwork. From a wider perspective, the Obama administration’s support for teacher evaluations evolved into a major bone of contention between the administration and the national teachers unions.

Nevertheless, the strong findings published in Education Next will provide fodder to education reformers who have argued that previous evaluation systems have failed because of poor design and execution, rather than a flawed underlying premise. They argue that despite the political and economic costs inherent in getting an evaluation system put in place, the recompense of a stronger teaching force could be worth the price.

The report concludes that “under a robust system of performance evaluation, the turnover of teachers can generate meaningful gains in student outcomes, particularly for the most disadvantaged students. The eight-year history of IMPACT shows that such efforts may incur political consequences, but are not politically impossible.”