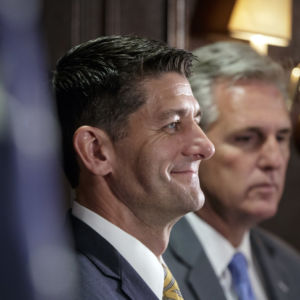 The Republican Catch 22 on Tax Reform and Trade Deficits

President Donald Trump promises to reform the tax code and decrease the trade deficit, but the two policy goals might actually contradict each other.

Congressional Republicans hinted at the final form their tax bill might take when they released a framework for reform September 27. They called for rate reductions for wealthy and middle-income individuals, along with businesses. But those proposed rate cuts stand to increase the deficit substantially, given that government revenue mostly comes from taxes.

“It does depend a lot on what happens to tax policy,” Joe Gagnon, a senior fellow at the Peterson Institute for International Economics, told InsideSources. “If Congress and the president pass a significant tax cut that raises the deficit going forward, I would predict that would start to push the dollar up again, which would make the trade deficit worse.”

The U.S. dollar has strengthened over the last few years thanks to policy changes, tightened currency production, and foreign fluctuations. As the dollar strengthens, its value increases relative to other currencies. A strong dollar means that exports become more expensive for foreign buyers. The current strengthening of the dollar and weak demand overseas have likely already deepened the trade deficit.

“The big risk to the trade deficit is having a big tax cut that pushes the dollar up, pushes interest rates up, and makes the trade deficit keep growing,” Gagnon said. “The interesting paradox is the more they do on tax policy, the more it could make the deficit worse, which they don’t want.”

Lawmakers should work to get the dollar closer to its true value, Gagnon adds. Some economists believe that the dollar is overvalued relative to its actual demand. The true value of the dollar hinges on how much it’s in demand, according to factors like exchange rates and demand for Treasury notes.

Republicans hope their tax plan will reduce the federal deficit by spurring economic growth. Employers will have more money to presumably invest back into their businesses and employees. But tax cuts alone are not enough to get businesses to invest into their operations, counters Robert Scott, an economist with the Economic Policy Institute.

“In some ways it could make things worse,” Scott told InsideSources. “It’s not going to lead to investment. Businesses don’t invest on the basis of taxes, they invest when they think there’s going to be growing demand for their products. This doesn’t generate any demand. But what it will do is increase federal borrowing, and that will push up interest rates, and when the interest rate goes up, the dollar rises, and so it will lead to a growing trade deficit. I think that’s a serious and unintended consequence.”

Economists and tax policy experts don’t agree on the economic implications of the framework. The Business Roundtable found in a survey that business owners would begin investing more back into their companies and employees if the tax system were reformed successfully.

The Institute on Taxation and Economic Policy found Oct. 4 that the plan would primarily benefit the wealthy with less relief for middle and lower income earners. The White House Council of Economic Advisers found in an Oct. 16 analysis that the plan’s corporate rate reductions would lead to an increase in average household income by $4,000 annually.

Scott at EPI doubts that the tax plan will help stimulate the economy. But even if the plan succeeds, he adds, it could still increase the trade deficit by causing the value of the dollar to rise. Republicans may very well stand to undermine their deficit goals, in other words, whether their tax reform plan is successful or not.

Senate Republicans recently passed a budget resolution, an essential step toward implementing tax reform. Their resolution set in place a streamlined process to pass their tax reform bill, and left lawmakers the flexibility to increase the deficit by $1.5 trillion over 10 years.

Senate Majority Leader Mitch McConnell insisted on October 22 that Republicans still aim to pass a tax bill that won’t reduce revenue. But, as the Tax Policy Center (TPC) found in a recent analysis, the tax framework could add to the deficit—by reducing federal revenue by $2.4 trillion over ten years.

Republican leadership can still find a way to avoid deficit increases brought on by tax reform. They originally hoped to use a border adjustment tax—a value-added tax levied on goods produced in a foreign land but sold domestically—but the idea proved too contentious.

The country has faced a growing trade deficit since last year, following some improvements. It generally trended around the $40 billion range before it suddenly dropped around the last recession in 2009. The trade deficit was approaching $70 billion before the economic downturn. It dropped to $25 billion before settling around its current average.

Congressional Republicans are expected to reveal their tax reform bill this week. Per CNN, the legislation could come as early as Wednesday.