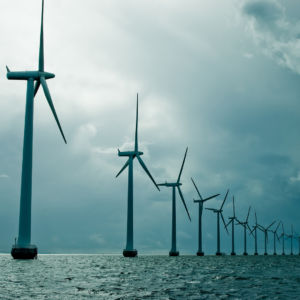 The wind blows everywhere, but so far wind power installation hasn’t necessarily followed it. While states like Oklahoma and Texas have constructed large wind farms, the northeast has lagged behind in installations. Offshore wind installations have met with resistance from landowners worried about ruined ocean views and fisherman concerned about the impact they could have on marine life. Now the industry is poised for change, as the Trump administration hints that it wants to fire up offshore development by streamlining permitting, and Congress and state governments are pushing for changes as well.

“We are committed to working with the Trump administration in pursuing an ‘all-of-the-above’ energy strategy, which includes a robust offshore renewable component,” said the House Subcommittee on Energy and Mineral Resources in a statement earlier this summer.

The Interior Department announced major lease sales off of the coast of Massachusetts earlier this year and is considering doing so for other lease areas off the coasts of New York and New Jersey. At the state level, three utilities in Massachusetts were awarded a record-setting contract for offshore wind last month. New Jersey also passed a law committing the state to procuring 3.5 gigawatts of offshore wind.

So far, European companies have been eager to move into the space. After years of working on the other side of the North Atlantic, they bring valuable experience that will help projects in New England. At the same time, European experience shows that the offshore environment offers real challenges in terms of equipment maintenance.

Saltwater corrosion and damage from winter storms mean that equipment wears out faster. A study in Britain in 2012 found that both on and offshore windmills had not reached their expected lifespans. The industry had predicted that the turbines would have a 20 year lifespan. However, the study found that most of the turbines were only able to effectively generate power for 12 to 15 years and that turbines’ efficiency decreased sharply as they aged.

When looking at the “load factor,” the percentage of electricity it actually produces compared with its theoretical maximum, turbines fell from operating at 24 percent during their first 18 months of operation to 11 percent after 15 years. For turbines located offshore, the decline was even starker, falling from 39 percent to 15 percent after 10 years.

Larger windfarms seemed to have worse performance, both in terms of production and maintenance, than did smaller farms. The researchers suspected that this might imply that windmills may interfere with each other when operated in close proximity.

Wind power advocates argue that as long as the turbines continue to produce power, they are continuing to return the investment.

“Once installed the main cost of an offshore wind project is spent. So it can be reasonable to operate the turbines as long as service costs stay controlled — and this can be more than the 20 years our turbines have been tested for,” said Henrik Stiesdal, CTO of Siemans Wind Power, in an industry Q&A.

Even so, it isn’t clear that American companies are eager to take on the additional challenges of the offshore environment when opportunities to build onshore windfarms are present.

“There are so many opportunities to do onshore, at substantially lower cost,” Mike Garland, the CEO of Pattern Energy Group, told Reuters. “It makes more sense for us to be focused in that area.”

This means that offshore wind may be domestic energy, but is less likely to result in domestic jobs, since many foreign companies import necessary materials such as subsea cables and specialized wind turbines. The only East Coast windfarm currently in operation, off the coast of Rhode Island, uses equipment from Spain, Denmark and France. If construction demand picks up, more of this manufacturing could switch to the U.S., but how quickly that would occur is difficult to predict.