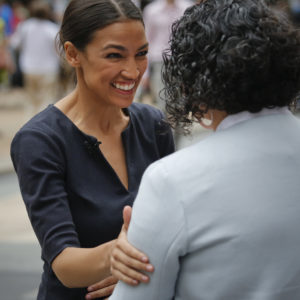 Alexandria Ocasio-Cortez made headlines this week after she upset incumbent Rep. Joe Crowley in New York’s 14th congressional district, running as a democratic socialist. For many, Ocasio-Cortez’s victory showed that the Democratic Party was lurching further to the left. She was one of the signatories of an anti-fossil fuel pledge and was not the only candidate to do so. More than 200 candidates who won their primaries and will appear on the ballot in the fall also signed the pledge.

“I pledge not to take contributions from the oil, gas, and coal industry and instead prioritize the health of our families, climate, and democracy over fossil fuel industry profits,” the pledge states.

Most of the signers are Democrats, but some Green Party members and Independents are also included. Since July of 2017, when the pledge campaign was launched, more than 700 candidates running for everything from local offices to governorships and U.S. congressional seats have signed the pledge.

“Ben Jealous was one of the first signers of the No Fossil Fuel Money pledge, and his victory tonight shows the importance of a strong climate platform to consolidating the progressive base,” Brant Olson, program director at ClimateTruth.org Action, a group that fights for climate action, said Tuesday in a statement.

All in all, the signers of the pledge include candidates from across the country running for levels of government and, admittedly, with varying chances of success. For every well known name, like Ilhan Omar, the front-runner to replace Minnesota Rep. Keith Ellison, there are many more long-shot candidates.

Even so, environmentalists believe that the pledge is important in continuing to keep the issue of fossil fuels part of the political discussion. However, the pledge itself is largely a public relations gimmick. Candidates are instructed to take a picture of themselves signing the pledge or to create a graphic combining the pledge text and their campaign logo, which they can then share on their website and social media accounts. The pledge itself is little more than a website, without any real enforcement mechanisms.

It is a continuation of a broader trend, which sees the Democratic Party moving to adopt more and more pro-environmentalist positions. In the run up to 2018, the Democratic Party has doubled down on its opposition to fossil fuels. Two weeks ago, the Democratic National Committee (DNC) voted unanimously to no longer accept donations from corporate political action committees (PAC) associated with fossil fuels including coal, oil, and natural gas.

In August, the DNC will consider extending the ban to include contributions of more than $200 from anyone employed by the fossil fuel industry.

Although stringent, the measures are unlikely to have a major impact on party finances. Around 90 percent of political donations from oil and gas companies went to Republicans in 2016, with the percentages climbing even higher for coal companies. In fact, over the last thirty years, Democrats never managed to garner more than 38 percent of contributions from the fossil fuel industries, a percentage which has steadily declined in more recent years.