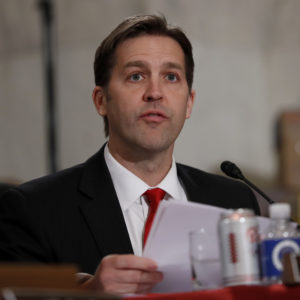 Sen. Ben Sasse, R-Neb., was late to take the stage on Wednesday due to the breaking announcement that former FBI director Robert Mueller had been appointed special counsel for the investigation of Russian collusion in the U.S. election. The event was delayed for a few minutes as the tech-savvy senator tweeted out a brief statement commending Mueller as “an exceptional public servant” and praising his “record, character, and trustworthiness.” In some ways, the tweet, the scandal preceding it, and even the ever more frequent intrusion of the digital world on daily life foreshadowed themes of Sasse’s talk.

During the Q&A with Washington Post writer James Hohmann, Sasse spoke bluntly about how American politics is failing, in part because of strains shown in our culture, which lacks the self restraint and personal discipline of earlier generations.

“This city doesn’t work and this Congress doesn’t work,” Sasse said. “We need to have a retrospective and prospective examination of what happened during the election.”

“A river of money flows to this place and that isn’t that way this was supposed to work.”

For this reason, Sasse believes that continued investigation into Russian collusion in the 2016 election remains necessary. At the beginning of the talk, he read aloud his formal statement, which was also posted online, and spoke favorably of Mueller. Sasse highlighted Mueller’s work at U.S. Attorney offices around the country and said that his selection should “give comfort” to those who had feared that the investigation would be quickly closed.

It is important that the investigation be part of a broader process of rebuilding Americans’ trust in government. For Sasse, Mueller’s selection was just one small footnote in the broader picture of the degradation of American civics, and, by extension, of American culture and values.

“We haven’t been doing basic civics,” he said, describing Washington as a place that “increasingly functions as though your party label is some part of your identity.”

“People want more transparency and a rebuilding of public trust, rather than an erosion of public trust,” he said. What we are seeing today is an inversion of this, where issues are increasingly politicized even as more and more Americans struggle with feelings of rootlessness and a loss of community.

“I don’t think the things we’re voting on are the most important parts of American life,” he said.

Only in America did people create a government, rather than submit to a strongman out of fear. This philosophical difference has dramatic ramifications. The idea that government does not give rights, was, he said, “a screaming claim about human dignity.”

And yet, claims about human dignity are not sufficient to decide all of today’s thorny geopolitical problems. The question is about the difference between recognition and responsibility. While Sasse readily acknowledges that all of the 6 billion people on earth have unalienable rights, as a U.S. lawmaker, his responsibility is to the 320 million Americans, he says.

“America has moral clarity about rights, but prudential debates about what to do about oppression overseas,” he summarized.

Despite his strong statements about American foundational values, though, Sasse worries about the future of the country, in what he described tongue-in-cheek as his diatribe against the half-naked Christmas tree. It is a reference to one December while he was working as a campus administrator. A group of students had been assigned the task of decorating a campus Christmas tree and dutifully hung ornaments as high as they could reach, before abandoning the task, leaving the top of the tree bare. Sasse says they never even considered checking to see if they could get a ladder.

“We need to build more resilience into our kids,” he said, presenting the moral of his story, “but we are raising them with less of that celebrating of scar tissue in their teen years.”

In the face of this, Sasse wants to start a conversation about self restraint and character development, essentially how to use the adolescent years more effectively. It’s a story of hard work and tough choices and the importance of values, and for Sasse this is essential to the preservation not just of the republic, but also American culture.

“The republic and our neighborhoods and families depend on teaching self restraint,” he says. “It is an American challenge, but it is not chiefly or primarily a government challenge”

The problems don’t start with a failure of self restraint, rather that is itself part of a broader breaking down of social ties. As people fear that the explosive rate of technological progress will destroy their careers, they also worry about its effects on the communities where they live. This is very much like the worries of the Gilded Age, Sasse says. These fears are real, he admits. The new economy, which has yet to even get a proper name, will see both sudden surges in prosperity and a need for workers to be flexible. To ease these changes, he suggests that government should perhaps look at offering mid-career training.

Despite the struggles, he is optimistic about technology, pointing out how it has allowed for an impressive amount of disintermediation, allowing ordinary people to invest in the stock market and travel the world, both occupations that for most of American history were restricted to the upper crust. Technology is poised to deliver exponential growth, he says, but workers need to be prepared to change to take advantage of it.

The connection between Twitter and Tocqueville perhaps reflects Sasse’s characterization of himself as “intellectually promiscuous.” He nevertheless retains a vision of the foundation of America, its founding virtues of ordered liberty, personal self restraint, and discipline, while looking forward with excitement about the world of Twitter, Uber, and the digital age. With a foot in both worlds, Sasse may be the Renaissance man of the the Senate.