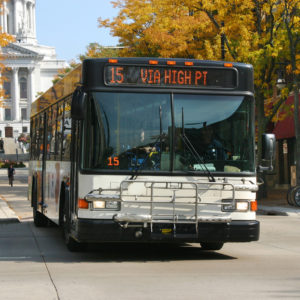 Save the Earth — Don’t Take the Bus!

Public transportation seems like it should be one of the more efficient ways to get around. After all, don’t buses reduce the number of cars on the road, leading to less traffic and cleaner air? According to their advocates, buses move people more efficiently than personal automobiles and without the high infrastructure investment costs of passenger light rail and subway systems.

“Public transit substantially reduces fuel use and greenhouse gas emissions, making it a wise public investment in a new, carbon-constrained economy,” according to researchers from the Center on Globalization, Governance, and Competitiveness in one oft-quoted study. “A typical passenger car carrying one person gets 25 passenger miles per gallon, while a conventional bus at its capacity of 70 (seated and standing) gets 163 passenger miles per gallon. These fuel savings yield commensurate cuts in CO2 emissions.”

That’s the theory at least.

In practice, public transportation systems do not have quite the emissions benefits that people believe they do. Outside of areas with high population density, like Manhattan, buses rarely run carrying enough passengers to reap the benefits of economies of scale. In fact, according to statistics gathered for the Department of Energy, when judged by average per-passenger fuel economy, buses fall below most other forms of transportation–including personal cars and light trucks.

This is because buses generally do not operate at full capacity. While a typical city bus can carry up to 70 people, even the most popular routes rarely maintain this ridership. In 2006, the average passenger load in American buses was 9.22, according to a report published by the Reason Foundation. (Buses don’t generally “break even” with single passenger cars in terms of emissions unless they are carrying a minimum of 11 passengers.)

Meanwhile, the most efficient buses are the ones that people least want to ride–namely those that are crammed full of people for the entirety of the route. Thankfully for commuter comfort, this doesn’t fit with general traffic patterns.

“While 70 passengers on a ‘standard’ 40-foot, 102-in wide bus, is certainly not unheard of in the transit industry, this is hardly a typical load, even on most crowded bus lines for most transit agencies, even for peak hour in-bound trips…” writes Thomas Rubin, a mass transit consultant in Oakland, California.

“Typically, a bus has a very small passenger load when it begins a route, picks up passengers more-or-less constantly as it approaches its peak load point, most commonly the leading edge of the central business district, and then has a steadily decreasing passenger load as it nears the end of the route.”

This data is not good news for proponents of the Green New Deal. The proposal calls for changes to the “transportation systems in the United States to eliminate pollution and greenhouse gas emissions from the transport sector as much as is technologically feasible,” specifically mentioning that this would be achieved through investment in “clean, affordable and accessible public transportation.”

The trouble is, everyday experience shows that this would be difficult to accomplish. Even Rep. Alexandria Ocasio-Cortez (D, NY), who campaigned on the need for the Green New Deal, has taken flak for spending nearly $30,000 on Lyft, Uber, and other car-for-hire services, even though, as the New York Post points out, “a subway station was just 138 feet from her Elmhurst campaign office.”

Meanwhile, her campaign spent less than $9,000 on MetroCard purchases.

More than hypocrisy, this may reflect realities of public transportation.

“AOC’s staffers are presumably taking so many Ubers for the same reason everyone else does: unless you’re in a very dense, very congested urban core, it’s way more convenient than transit,” tweeted Megan McArdle, a columnist for the Washington Post.