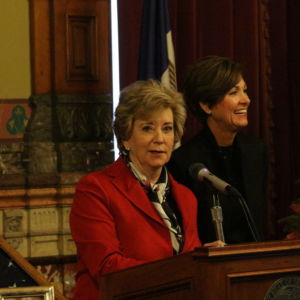 U.S. Small Business Administrator stopped by Iowa as part of her Ignite Tour. She spoke with InsideSources about the desire by small businesses for tax cuts. Ethan Stoetzer/InsideSources
News

How the SBA Is Working to Aid Small Businesses

Linda McMahon, head of the U.S. Small Business Administration (SBA), detailed her plans Tuesday to help small businesses. McMahon, the former CEO of World Wrestling Entertainment, has her own experience in small business as she grew a small, regional entertainment company, into a billion-dollar global brand.

The SBA is a federal agency that provides support to entrepreneurs and small businesses in numerous ways like loans and counseling. McMahon was sworn in to serve as administrator in February 2017. She has since visited dozens of fields offices across the country in her effort to go to all 68.

McMahon detailed what the agency has been doing to better help small businesses succeed during a congressional hearing. She also discussed how visiting field offices has helped with that mission. The Senate Small Business and Entrepreneurship Committee hosted the hearing to explore the state of small businesses and the agency.

“These visits have reinforced in me the valuable role small businesses play in our economy, and the importance of the SBA and our resource partners in helping them to succeed,” McMahon said during the hearing. “My tour has also allowed me to hear directly from business owners about what is on their minds.  Among the frequent things I hear is the burden of federal and state regulations, the complexity of healthcare and taxes, and recently workforce and labor challenges.”

McMahon added that the visits allowed her to hear firsthand from the agency officials on the ground and small business owners themselves. She also had the opportunity to meet with some committee members in their districts during her travels. They held roundtable discussions and toured a manufacturing facility.

Republican Sen. Jim Risch, the chairman of the committee, asked about the small businesses that are having trouble accessing capital. Ranking Democrat Ben Cardin also expressed concern over loan and capital access, especially when it comes to minority business owners. Both applauded what the agency has been doing despite the concerns.

McMahon responded to the senators by noting that she is working directly with regional offices to figure out solutions that work best for them. She notes that the same solution doesn’t always work everywhere. She also highlighted what the agency has been doing elsewhere to help small business, such as their premier lending program having a record year.

“In addition, access to mentoring was high as our SBA network reached 1.4 million people,” McMahon said. “Elsewhere, in our microloan program, I’m pleased to see that 40 percent of those loans have been made to minorities. And in our veterans program more than 17,000 veterans were trained in fiscal year 2017. And our emerging leaders program, we’ve increased the number of locations and have a record number of participants.”

McMahon added that the agency was also able to open up new opportunities by expanding women business centers. The SBA has also worked to address management problems by resolving outstanding recommendations from the SBA Inspector General and Government Accountability Office.

McMahon applauded agency employees for the work they did during a string of devastating hurricanes last year. The SBA helps small businesses that were impacted by national disasters while providing support to other agencies. It  deployed 5,000 personnel for hurricane relief since last summer while approving 130,000 loans totalling $6.7 billion in lending. McMahon says there is still a lot of work to do in Puerto Rico and the Virgin Islands.