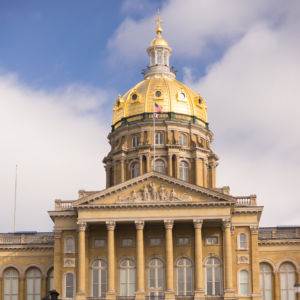 The Republican-controlled Iowa Senate intends to stick with its water quality bill as its currently drafted, despite differences of funding opinion from the legislature’s other half.

At the end of last year’s legislative session, the Senate drafted and passed a water quality bill, Senate File 512, that was then passed to the Republican-controlled House. The House, which already had a water quality bill in the process of being drafted (House File 612), decided to use its draft as an amendment (H1440), which was voted down once it was returned to the Senate, just as the session concluded.

“Procedurally, [the Senate] rejected that amendment and basically said ‘no thanks we liked our version and we’re not going to accept the amended version’ after it came out of the House,” said Chair of the Natural Resources and Environment Committee Sen. Ken Rozenboom (R-District 40).

Rozenboom said that the rejection of the House’s amendment, which was a strikethrough amendment that virtually replaced the Senate bill with the House bill, left the Senate bill as the only piece of active legislation on water quality. Rozenbloom said that there were attempts made to compromise in the last 24 hours before the session ended, but those attempts “failed and fell apart.”

What remains is the Senate bill, in tact, supported by not only the Iowa Department of Agriculture and Land Stewardship (IDA), but also the Iowa Department of Natural Resources, as well as Governor Kim Reynolds, who said that water quality was her top priority for 2018, and stated that she wants a bill addressing it to be the first bill she signs.

Water quality has become a galvanizing issue among all lawmakers and activists as Iowa’s commitment to upholding and making progress on its Nutrient Reduction Strategy (NRS) has taken on greater importance. The NRS will enter its fifth year of implementation in 2018, as will the plans of 12 other states who border the Mississippi River. The United States Environmental Protection Agency (EPA) announced in 2012 that it was targeting a 45 percent reduction in nitrogen and phosphorus to aid in shrinking the Hypoxic “dead zone” in the northern portion of the Gulf of Mexico. This year’s NRS showed the highest amount of public-private funding amounts since the plan’s implementation in 2013, but the report stated that more funding is necessary to create more incentive for individuals to take part in reduction programs. While legislators support adding public dollars to water quality, the matter relies more on how to do so.

The Senate bill relies on funding from money saved on the Vision Iowa Program. This program received $15 million per year in allocation from the budget for 20 years based on gambling receipts, for the creation of tourism facilities across the state. With the funding not able to be diverted from Vision Iowa until 2020, the bill will turn a portion of Iowa’s sales tax on drinking water into an excise tax, increasing every year until it reaches three cents on the dollar, and remaining at that rate.

Rozenboom said that the bill would start off taking one cent in 2017-2018, two cents in 2018-2019, and three cents in 2019-2020, creating funding levels of $4 million, $8 million, and $12 million respectively. The money would be redirected to set up a Water Quality Infrastructure Fund within IDA. Then, in 2020, the funding from Vision Iowa would add on to that three-cent rate, equating to a total of $27 million annually ($15 million plus the $12 million in water meter tax). The bill would sunset in 2029, as would the funding allocation and excise tax.

This is in direct contrast to the House’s amendment, which turned all of the current six cents-on-the-dollar sales tax for drinking water into an excise tax, diverting all the money from the state’s general fund, allocating $24 million annually for water quality, while also appropriating funds from within the Rebuild Iowa Infrastructure (RIIF) fund. The re-appropriation would start at $5 million in 17-18, ending in $22 million by 2029-2030. With the metered tax, the total amount of funding would be approximately $46 million. The excise tax on water meters, and the remainder of the bill, would expire in 2042.

“We don’t think its responsible to throw a lot more money into a system,” Rozenboom said. “There has to be technical staff hires, plans made, all those sort of things and so this bill allowed us a three year build up to utilize $27 million a year.”

House Ways and Means Committee Member Rep. Chip Baltimore (R-District 47), who aided in developing the House legislation explained that the redirection of water meter sales tax and the re-appropriating of RIIF dollars was “better policy for the entire state.”

Baltimore explained that the House bill would allow 2/3 of the total funding to be used by the Iowa Finance Authority (IFA) to establish a revolving loan program which the entity could bond against to increase the funding it received. This would allow public funding to reach high enough levels to remain impactful.

“Water quality in Iowa is to the extent that the state government will never be able to appropriate enough money for this regardless of the source,” Baltimore said. “We can’t do it. The NRS is estimating it’s going to take between $4-$6 billion to do this. If you follow Senate File 512’s approach to ‘solve’ water quality to the extent you can it would require $2-$3 billion in state tax appropriations in the cost share program and $2-$3 billion in farmer investment. If you follow agriculture in Iowa right now farmers are kind of struggling economically, so where are they going to get $2-$3 billion?”

Baltimore said that the mechanisms of the House bill spread the responsibility of reducing nutrient expenditures across point (municipalities and industry) and non-point (farm land) sources of pollution, incentivizing farmers and municipalities and industry to partner and take advantage of funding to address expenditures. He said that the schedule of funds from 17-18 through 2029-2030 isn’t as important as the structure and mechanism of allowing IFA to bond against its appropriations in order to aid farmers.

“From my perspective as we were putting this together last year, the most important thing was to get this entire structure put together,” Baltimore said. “As far as actual funding goes, it doesn’t matter where it comes from. There’s all sorts of opportunities, in taking some RIIF money, you can do it that way, if you want to peel off just a flat out appropriation from the general fund, you could do that way. You can convert this metered water sales tax into a metered excise tax and do it that way, but the key for me was put that structure in place with the financing, the collaborative focus on watersheds and put financing structure in place, regardless of the sources of the funds that go into that system.”

Rozenboom said that the funding piece of the House bill was “objectionable” due to the fact that it would be “burdensome” on the general fund, and that revisiting a new version of water quality legislation, amidst a a tough budget year, could mean the end for any type of legislation.

“We have greater budget problems than we thought we had,” Rozenboom said. “This falls under the heading of new spending and I fear if we were to bring something new back to the Senate, we’d have a hard time keeping colleagues on board because of the budget.”

Rozenboom said as of right now, “the ball is with the House,” but doesn’t want to come off as “playing hardball.” He said that it is a priority of the governor, as well as a priority for House leadership.