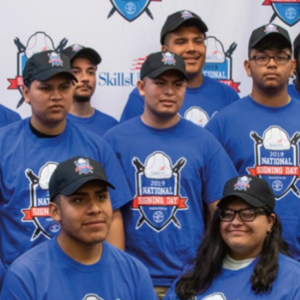 The young faces on the front page of The Journal, my local newspaper, were beaming as parents and mentors looked on with pride. This was “Signing Day” at the high school in Walhalla, S.C., a special time when much sought-after seniors sign contracts with their teams of choice. But these young people were not signing to play football or other sports at a celebrated college or university. They were signing commitments to go to work with firms and organizations that will support the next leg of their lives’ journeys.

For some, the employer commitment will enable the student, while working, to complete a two-year technical education program. For others, it will be a co-op program while the student completes an engineering bachelor’s degree. For still others, it is a commitment to participate in a firm’s accelerated apprenticeship program.

Similar signing days are occurring nationwide. Some are coordinated by SkillsUSA, which has seen some 3,000 students from 300 schools sign up for employment in skilled trades.

Of course, football, basketball and soccer are not exactly being eclipsed by a new type of study and work. Clemson University’s powerful athletic program sits in the next county. This is Tiger territory, where every game is sold out and students nationwide seek entry. Rest assured, the old college signing day is still a very big deal.

Rather than reflecting some kind of decline in sports or kids’ diminished hopes of becoming celebrated athletes, the new emphasis on work and careers is an indication that graduating seniors, their parents, and prospective employers have learned something. They know that a brighter bridge to the future purposefully combines work with educational attainment, whether it be on the job, in tech college classrooms, or in university degree programs.

But still, the question remains, why are we seeing this now?

It’s simple, really. The renewed emphasis on the dignity of work and study is a product of exceedingly tight labor markets. We have a high-performing economy that is hungry for highly motivated, career-oriented employees.

Our national economy is experiencing the lowest unemployment rate in 50 years. There are now far more job openings waiting to be filled than there are unemployed people. Wages are rising, and so is the quit rate. Experienced workers are not reluctant to leave a good job when they know about a better one.

As a result, firms and organizations that are focused on long-run performance have learned that the old ways of recruiting workers just don’t get the job done. Meanwhile, parents and students are applying some lessons from the economic turmoil of the previous decade: workers need a long-term plan to hold specific, in-demand skills.

But the arrival of signing day implies something else. The organizers understand that an event seen by young people as “cool” and worth celebrating has a strong chance of becoming a tradition. It may not have the cachet of a full-ride scholarship to Clemson or another national athletic powerhouse, but it’s an indication of a bright future.

Signing day may become a cool event, but that special status will depend on the experience of this year’s signers and the extent to which the promises made are delivered. Let’s hope that signing day will be around for years to come.