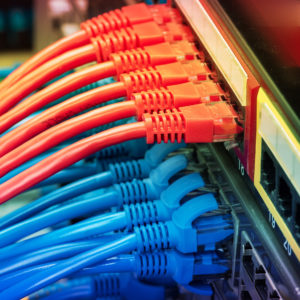 Democrats, small internet providers, and some of the biggest companies in Silicon Valley are ramping up opposition to the Federal Communications Commission’s plan to deregulate the biggest business broadband providers in the U.S.

The BDS market provides high-powered, high-speed internet to businesses, hospitals, libraries, schools, public safety offices, ATM networks, and wireless carriers. The market itself is made up of incumbent local exchange carriers (ILECs) — legacy providers like AT&T and Verizon, which are compelled under agency rules to lease portions of their networks to competitive local exchange carriers (CLECs) — small providers like Sprint and Windstream — in order to boost competition and prevent ILECs from obtaining a monopoly.

Last year, the FCC found 97 percent of areas across the U.S. have at most two BDS providers, and CLECs like Sprint have complained in recent years ILECs use anticompetitive leasing rates and so-called “lock-up” contracts to force CLECs into strict terms of service. Those include overcharges for failing to use their maximum network allowance, and making it harder for CLECs to transition onto newer internet protocol-based fiber networks.

Consumer groups claim those overcharges cost consumers billions annually and hurt economic growth (though others challenge those numbers). Last year, then-FCC Chairman Tom Wheeler sought to address the issue with stricter regulations for the market, including price caps. Those regulations were among the first to hit the cutting room floor when President Donald Trump won the White House in November and installed his own Republican chairman, Ajit Pai, to lead the FCC in January.

Now Pai wants to do the opposite, circulating a proposal to deregulate certain BDS markets with one competitor “nearby” or within “a half mile,” essentially allowing a duopoly to meet the new Republican FCC’s standard for competition. Pai scheduled a vote on the proposal during the FCC’s April 20 open meeting.

“But, the data hasn’t changed,” Computer & Communications Industry Association (CCIA) President Ed Black said of the years of data the previous FCC gathered before Wheeler’s proposed rules. “CCIA is concerned that the FCC’s action would allow incumbents, who already control access to these crucial broadband bottlenecks, to arbitrarily hike their rates. We hope the FCC will focus on promoting competition and free enterprise and not let incumbents increase rates on small businesses, schools, and hospitals, who have few if any choices.”

In its filing, CCIA expressed concern “the Commission’s new half-mile test seems to rely on assertions based on potentiality while not realizing the realities of the marketplace where a competitor faces high costs to extend that fiber to the building,” predicting Pai’s order “would not effectively promote competition” and instead “lead to price increases that would ultimately be born by consumers.”

Trade group INCOMPAS, which represents CLECs including Sprint and Level 3 (as well as fellow CCIA members Amazon, Facebook, Microsoft, Netflix, and Google’s Fiber division) asked the FCC this week to postpone the vote until it releases the list of business broadband markets it’s targeted for deregulation.

“You have championed transparency, including sharing drafts of Commission orders prior to their adoption. That is commendable, INCOMPAS CEO Chip Pickering wrote to Pai. “I urge you to demonstrate further commitment to open and informed decisionmaking by taking the time to clear the publication of the list of affected counties and to provide the public a reasonable opportunity for review and comment prior to proceeding to a final vote.”

Last year, INCOMPAS partnered with Verizon to suggest a joint plan for the business broadband market, later endorsed by Wheeler. Cable companies opposed the technology neutral plan because it would have subjected them to the same regulations.

Commissioner Mignon Clyburn, the FCC’s only remaining Democrat, asked Pai to do the same thing, and implied the chairman was being hypocritical of his own pledge to be more transparent than his predecessors.

“Chairman Pai has been a champion of transparency,” Clyburn said. “It is puzzling, then, why he will release the text of the item, but omit a key appendix listing which counties are deemed competitive, until the Order is released. We have the information. It will become public when the Order is released. So why is it that the FCC has taken the position that it will vote on an Order before the public gets to see exactly what the Order does? Just what are we trying to hide?”

Clyburn said the FCC “should release this list immediately.”

“This is the only way the public can truly evaluate the practical effects of the FCC’s proposed actions. If for some reason, that is unknown to me at this time, we cannot release this list expeditiously, we should delay our vote on the proposed Order until the public can see it ‘well in advance’ of a FCC vote.”

In a blog post last month, Pai said the FCC’s 12 years of collected data on the business broadband market has shown “substantial” competitive growth since cable providers entered the market (the FCC deregulated AT&T in 2009 after meeting competitive triggers designated by the agency).

“Where this competition exists, we will relax unnecessary regulation, thereby creating greater incentives for the private sector to invest in next-generation networks,” Pai said. “But where competition is still lacking, we’ll preserve regulations necessary to prevent anti-competitive price increases.”

USTelecom, a trade group representing AT&T, Verizon and others, cheered Pai’s plan earlier this week, but suggested it didn’t go far enough, according to Broadcasting & Cable. During a meeting with Pai, representatives reportedly described the chairman’s plan to scale back the FCC’s price-setting role as “relatively constrained.” The group said the FCC’s method of measuring competition is “too conservative,” according to B&C, and that incumbents are no longer the dominant forces in the market.

CenturyLink and Frontier, two other large incumbents, gave the plan a thumbs up in their own joint filing to the FCC.

“Competitors operate in 95.2 percent of all census blocks where an ILEC offered [business data services], CLECs are the only BDS suppliers in 13 percent of census blocks, and, among those buildings served only by an ILEC, 98.7 percent are close enough to competitive facilities to experience the price-constraining effects of competition,” they wrote.