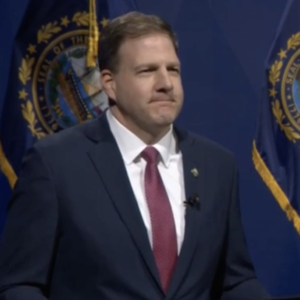 Standing Alone Before The Camera, Sununu Calls For ‘Neighborliness’ in Inaugural Speech

It was the Republican governor’s third, and it was certainly the most unique. Dominated by calls for unity, community action and “neighborliness,” Sununu strained mightily to make the case that the heart of  New Hampshire’s libertarian state motto, “Live Free or Die,” is really a call for community spirit and cooperation.

“In this inaugural address I’d like to focus on new beginnings and the next chapter we will write for ourselves.  And I believe our responsibility tonight is to capture the opportunities of tomorrow, not dwell on the ordeals of the past,” Sununu said, adding:

“There are literally hundreds of heartwarming stories of self-sacrifice and community altruism.  And each one of those collectively defines the Live Free or Die spirit we all cherish.”

It’s not easy to convert the state’s motto from shorthand for self-reliance and contrarian independence into a Sermon-on-the-Mount-style synonym for collective action and deferment to the majority, but Sununu soldiered on.

And speaking of “sermons,” that’s exactly the word several NH political insiders used to describe the 30 minute speech to NHJournal.  Sununu, a pro-choice Republican in one of America’s most secular states, used a notable number of religious references, quoting the Golden Rule (“Do unto others…”), the Christian hymn “Let There Be Peace On Earth,” and multiple references to prayer. Sununu apparently understood how it sounded, too.

“Listen, I’m not trying to preach to anyone, trust me, I am also a work in progress.  However, when I look at the condition of our nation today, when we examine what transpired in Washington yesterday, I know it’s going to take the grace of God and all of us working together to bring about the changes I believe we all want.”

The reference to the violent Trump supporters who ransacked the U.S. Capitol may be the key to putting Sununu’s “Why can’t we all just get along” speech into context. Sununu was optimistic and smiling, but he was also calm and reassuring. NH Democrats may be complaining on social media that Sununu didn’t denounce Donald Trump, but his message of unity and reconciliation — along with his demeanor itself — was a not-too-subtle rebuke of Trump and his politics.

“When our side doesn’t win, it doesn’t mean there’s a conspiracy or the world is out to get us.  It simply means we have to try harder next time.  We must put forward better and more compelling arguments on the battlefield of ideas,” Sununu said.

And he went out of his way to decry the “cult-like status we give” elected officials. “Almost as if they aren’t people, but deities.”

“But it isn’t real,” Sununu added. “Let’s remember we are elected to serve those we represent, not the other way around.”

At the very end of his inaugural address, Sununu threw in a few token references to public policy: “More balance” in education funding, more money for student loan debt assistance, tax cuts and, of course, paid family leave (“it can and must be done without an income tax.”)

But most of the speech was designed to reconcile the NHGOP’s embrace of individual liberty — sometimes to an extreme — with Sununu’s vision of collective action addressing COVID-19 and a call for Granite Staters to feel the burden they bear to do better by their neighbors.

It’s not a speech that’s likely to be remembered. (That’s not a criticism. Few inaugural addresses are.) It also raised the question — as one NHGOP’er said to NHJournal afterward, “What the hell was that?”

Cynics who see only politics could argue it’s a speech a pro-choice Republican who hopes to be on the national ticket of a pro-life GOP might give.

It’s just as fair, however, to say it was a speech to meet the current moment, a call for unity and grace at a time when Granite Staters are truly concerned by the current level of political anger and division.

“All the greatest policies in the world simply will stall and be left as nothing more than words on a forgotten page if we cannot resolve how to move forward with, and be inspired to accept, that we each have a role to play that is bigger than ourselves,” Sununu said.  “Our redemption lies in finding the path that leads us to fight for those tomorrow who may not be fighting with us today.”

It won’t fit on a license plate, but it may be the message most New Hampshire residents want to hear right now.