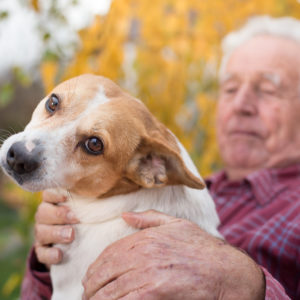 I am on the way to testing one of my dogs for certification as a “Canine Good Citizen (CGC)” or popularly referred to as a therapy dog, and I call my 75-year-old sister, Lee, to let her know.  “You are taking Teddy to get tested?” she asks. Teddy is our 1-year-old goldendoodle, and I respond, “No, I’m taking Nemo.”  Nemo is 12, so well past his prime. He was trained many years ago to be a therapy dog, but life being crazy and time being scarce, we never took the test to have him certified.

So eight years later and hoping he will remain obedient while a stranger carefully observes him, I explain to my incredulous sister my motivation. “It is about staying relevant,” I explain. Then, as an afterthought, I add, “Because it is never too late to earn an extra degree.” She laughs, and makes me promise I will call her with the results.

One hour later, back in the car, I call my sister and declare, “Nemo passed with flying colors.” Lee sounds almost as gleeful as I was feeling but full of questions. Her first question:  “Is Nemo so proud?”

“Lee,” I answer, “he has no idea what he did or that he should be proud. He simply obeyed commands when 10 different tests were sent his way.”

I laugh because I know two things: My sister really does not understand dogs, though she loves mine. Also, the certification was done more for me than for Nemo.

Why does “staying relevant” mean so much to me, and why is Nemo its embodiment? I have seen so many ways people struggle to stay relevant as they age. When my mother was 91 she longed for self-reliance and questioned her value. We knew she mattered greatly, but she didn’t always know that. She was the first person we would call after either a personal challenge or a moment of celebration. She always offered sage advice and an abiding faith in us. Her late-in-life contribution was that she showed us how to grow old with grace and dignity. I reminded her of this when her spirits flagged.

Examples of staying relevant surround me. My sister Lee travels the world, running workshops on diversity, inclusion and emotional intelligence. She comes home travel-worn and full of new aches to accompany her old ones. After she drops her bags, she usually heads straight to her garden to prune roses and replenish her soul. Then, she goes back on the road.

My other sister, Beth, also in her 70s, has similarly felt the need to stay relevant. Beth spent decades as a difference maker in the Los Angeles school system — as both an elementary school principal and later an administrator. After retiring and still wanting to contribute, she figured she would pay her lessons forward by mentoring young principals. She also sits on the board of a synagogue that is trying to reinvent itself. Her greatest difference-making pleasure is being a force in her grandchildren’s lives.

It seems that everywhere I go — on the tennis court, at the dog park, at a coffee shop, in a meeting — people are working hard to stay relevant.

Today’s reveal? A woman told me, “TripAdvisor tells me I am in the top 1 percent of reviewers with 155,000 people having read my travel reviews. I feel significant.”

Yesterday someone shared that she thinks her kids aren’t listening to her anymore. I routinely hear about some boss who is half someone’s age, telling a baby boomer what to do — for example, a millennial communications manager strategizing on the use of social media while an older employee rolls her eyes. How many ways can we spell irrelevance?

So what gave me the idea to have Nemo certified for pet therapy? I want a visual reminder of relevance. Certainly, there will be other benefits. People who need some love can find a wonderful four-legged creature at their side, his tail wagging as he waits to be petted. Teddy, the puppy, will eventually follow his example and understand the need for kindness and self-control (very hard for a dog). Nemo helps me to remember that we can stay relevant for a long time and that it is our attitude that counts most. There are so many ways to stay engaged and help make the world a little kinder. One week into his certification, Nemo has already provided therapy to me.