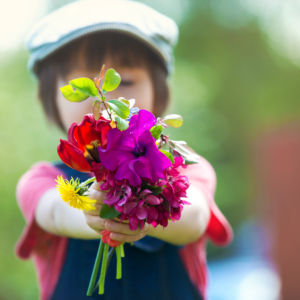 Planting a garden, building a tower from blocks, or even just talking through math concepts with a child can have a profoundly positive impact on the formation of their executive functioning and eventually on academic outcomes, according to proponents of early childhood STEM education. STEM, a commonly used acronym for the academic fields covering science, technology, engineering, and mathematics, is increasingly a point of emphasis in middle schools, high schools, and post-secondary institutions around the country—but perhaps not enough focus is given to the subjects for younger students, according to a report issued recently.

The Joan Ganz Cooney Center at Sesame Workshop and New America issued the study “STEM Starts Early” after directing educator focus groups and conducting an extensive literature review. Elisabeth McClure, a former research fellow at the Cooney Center and the lead author of the report, spoke with InsideSources about her findings.

A key takeaway for parents, educators, and policy-makers is that “early STEM experiences predict later academic outcomes better than early reading skills,” according to McClure. In other words, the huge emphasis on promoting literacy in a child’s early years may not be the most effective way to ensure that they are prepared for formal schooling and beyond. Instead she called for integrating STEM concepts into literacy instruction and vice versa—as she argues the subjects reinforce one another, particularly at an early age.

The advantage of teaching STEM to students is two-fold, according to the study. Not only are important traits like perseverance and determination ingrained in children through the trial and error process inherent in science education, but also children are already naturally predisposed to curiosity and hands-on exploration, said McClure.

The study also references a 2013 national survey that found that more than four in five K-2 classrooms do not spend time on science on a daily basis. This failure to introduce and reinforce STEM concepts at an early age is particularly damaging to students from low-income backgrounds, who are already more likely to be at a disadvantage in STEM fields before they set foot in a classroom, said McClure.

Furthermore the shift in the public’s approach to early STEM education must go beyond the school system, according to McClure. She thinks of early childhood learning as an ecosystem, which is impacted by concentric circles of influence ranging from parents to childcare providers to community organizations to public policy and even to the public’s perception of STEM subjects. For example, the report cites the continued challenge of the pervasive effect of differing societal expectations between boys and girls as a key obstacle to overcome. Another common misconception, according to the study, is the unsupported belief that fundamental reading and writing skills should be acquired first, before complex scientific concepts are introduced.

Part of the problem, said McClure, is that the public should be thinking in terms of “STEM habits of mind, not STEM concepts.” Meaning that for children under the age of eight (which is her definition of “early childhood”) the focus should be on active exploration and tinkering, rather than prescriptive quizzing or lecturing on concepts through flashcards.

The literature review and focus group led by McClure also found that teacher training and professional development in early childhood STEM is lacking. Many prospective teachers and childcare providers who go on to work with young children are not given specialized education in STEM fields. When they are introduced to STEM subjects, the lessons are rarely integrated into the latest in learning science and child development which would inform best practices for how STEM mindsets should be inculcated in early childhood.

“We need to get teachers excited about STEM,” said McClure, who argued that by-and-large the early childcare field is “STEM anxious.” The inability to correct these failures in teacher training and professional development leads to generational feedback cycles where poor teaching methods are passed down over and over again, she said.

The broad recommendations laid out in the report are therefore a reflection of the holistic approach McClure and her colleagues took to examining the state of early childhood STEM education. The report calls for engaging parents, strengthening teacher preparation, better alignment of curriculum, shifts in public attitudes, more research, and policy action across government.

In addition, a key point McClure emphasized repeatedly is that while children have a natural tendency to curiosity and a will to understand how the world works, they need adults to reinforce the learning and keep them on track to continue to persevere through failed experiments and other setbacks. If taught correctly, McClure said, “narrative drama” could be injected in a STEM session as anxious children wait to see if, for example, the flowers they spent weeks watering and protecting actually manage to come into bloom.