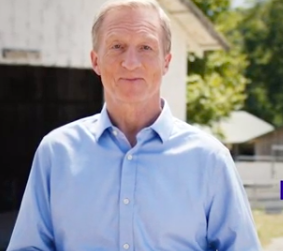 The same day billionaire Tom Steyer announced his 2020 candidacy, veteran Democratic strategist Bob Shrum debunked the stories that this was a last-second change of mind by the progressive activist.

“Look at his video, it’s very impressive. It was well-crafted and planned out, which tells me this was not a sudden decision,” Shrum told InsideSources.

More evidence that Steyer’s been planning to enter the race for a while: the $1.4 million in TV ads he launched today across four states, a larger buy than all of the other 2020 candidates combined. The ads, which Politico reports begin airing today, are scheduled to run through July 24 in the four early primary states of Iowa, New Hampshire, Nevada and South Carolina, as well as on CNN and MSNBC.

Observers note that the $1.4 million is just a small slice of the $100 million the California billionaire has committed to his 2020 POTUS race. Still, Shrum says, it’s easy to over-estimate the power of Steyer’s purse.

“It’s not automatic that Steyer makes it into the top tier of candidates. Yes, $100 million in the bank is important, but the others can collect money as well–just look at the latest campaign filings,” Shrum said.

In the first two quarters of 2019, the top four Democratic candidates (based on fundraising) have already raised more than $120 million. 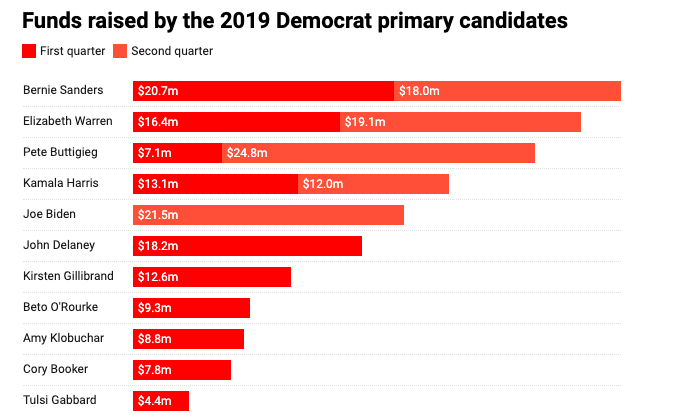 “There’s no reason several of the other candidates can’t raise and spend $100 million or more,” Shrum said. “The real test for Steyer is if there’s room for him in this race.”

Steyer is running as a progressive populist, sharing the same ideological real estate as Sens. Elizabeth Warren and Bernie Sanders, among others. Some of Steyer’s campaign rhetoric would fit right in on President Trump’s Twitter feed.

“Americans are disappointed and deeply hurt by the way they are treated by what they think is the power elite in Washington, DC,” Steyer said in his announcement. “Nothing’s happening for real people.”

Steyer’s competitors have had a mixed reaction to Steyer’s decision to enter the race.

“God bless him,” Sen. Kirsten Gillibrand said at an event in New Hampshire Tuesday morning, and she used Steyer’s announcement to reiterate her support for taxpayer-funded campaigns.

Sen. Sanders, who has been frequently praised by Steyer in the past, didn’t exactly return the favor.

“I like Tom personally, but I do have to say as somebody who in this campaign has received 2 million contributions, averaging $19 a person, I’m a bit tired of seeing billionaires trying to buy political power,” Sanders said in an interview Tuesday.

“The Democratic primary should not be decided by billionaires, whether they’re funding Super PACs or funding themselves,” Warren said in a tweet. “The strongest Democratic nominee in the general will have a coalition that’s powered by a grassroots movement.”

Warren has made her rejection of PAC money and large-dollar donations (from donors like Steyer) a pillar of her campaign. Part of the progressive populist message is that wealthy people have too much political power. Can a billionaire like Steyer make that case?

Shrum thinks so. “I reject this idea that if you have money you can’t fight for ordinary people. Look at Teddy Roosevelt, FDR, the Kennedys. That argument is absurd. Candidates like Steyer can fight for those voters. What I’m waiting to see is if he has the political talent to connect with them.”