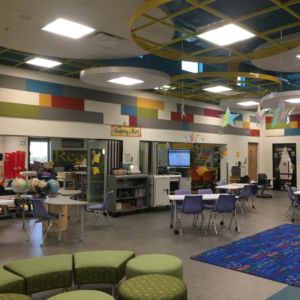 The new annex at Fort Benning's Faith Middle School features rolling chairs and desks that allow students to come together and work in groups. Visit the Columbus Ledger-Enquirer for part one of the two-part feature on the challenges and opportunities of educating America’s military-connected students. (Leo Doran/InsideSources)
News

Schools run by the U.S. Department of Defense outperformed public schools in the latest national assessment of educational outcomes.

The scores from the National Assessment of Educational Progress (NAEP) measure whether fourth- and eighth-grade students are operating at grade-level expectations. Overall, the 2017 scores were similar to 2015 with few bright spots. Schools run by the Department of Defense Education Activity (DoDEA) were among those highlights. In particular, achievement gaps between white students and minorities are closer than they are throughout most states.

“We looked at the NAEP results and are delighted,” said DoDEA Director Thomas Brady during a scores release event earlier this month at the National Press Club in Washington, D.C.

Over the last four years, Defense Department schools have introduced academic standards designed to prepare students for college or to jumpstart a career right after high school. The system is among more than 40 U.S. states that are using similar standards. But while other states’ scores stagnated, DoDEA has improved its performance.

Information provided by Elaine Kanellis, deputy director of communications for DoDEA, indicates that the scores reflect a commitment to ensure that every one of the more than 72,000 students is given an opportunity to succeed, particularly minority students. According to an April 2017 Pew Research report, 17 percent of active-duty military personnel are black while 12 percent are Hispanic. For DoDEA schools, that means a more diverse population similar to what’s seen in large urban areas. Combine that with the fact that military families move frequently – on average, military children attend between six and nine schools – and the challenges for these schools makes their success that much more remarkable.

A breakdown of scores shows that:

“The military values education and places an important emphasis on it for all Servicemembers to develop skills and advance in the ranks,” Kanellis said. “Our students see their parents’ commitment to and emphasis on education and they emulate that commitment.”

While the academic performance of DoDEA schools is impressive, parents cannot be complacent, said Christi Ham, chairwoman of the coalition Military Families for High Standards. Military children don’t always have the option of attending a DoDEA school. For example, the DoDEA school at Ft. Bragg in North Carolina stops at eighth grade. In Kentucky, there are high school options for families at Ft. Campbell and Ft. Knox but only families who live on-base can send their children there.

Math scores for North Carolina’s fourth graders and reading scores for fourth graders in Kentucky both declined last year. Scores for Georgia either stagnated from 2015 or showed slight improvement. Ham’s family was posted at Ft. Benning, GA, while her husband served as the brigade commander. She said the family decided to live off-post and send their son to a private high school instead of risking the lower-quality education at the public school that serves the area.

“It’s a parent’s prerogative to look wherever they would like,” she said. “It’s just a shame that it isn’t always an easy decision. Once we leave (DoDEA) environments, we’re at the mercy of what is offered as the follow-on school.”

The coalition that Ham leads advocates for more rigorous academic standards in all schools that challenge students so that they will be ready for college-level courses or the demands of employers.