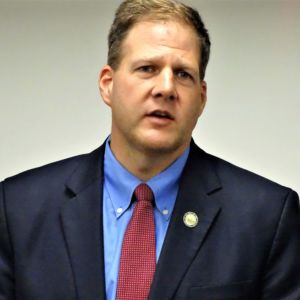 Gov. Chris Sununu called the rioters who swept through the U.S. Capitol Wednesday “domestic terrorists” and blamed Trump for “contributing to the insurrection.” He was not, however, willing to call for his fellow Republican to be removed from office.

“Our priorities must be the healing of our nation and an orderly transition of power on January 20. As elected officials, our words are held to a higher standard, and it is clear that President Trump’s rhetoric and actions contributed to the insurrection at the United States Capitol Building,” Sununu said in a statement to NHJournal Monday.

“The domestic terrorists who attacked the United States Capitol must be held accountable and prosecuted to the fullest extent of the law,” Sununu added.

All four members of New Hampshire’s all-Democrat federal delegation support removing President Trump from office. Both Reps. Annie Kuster and Chris Pappas have indicated they intend to vote — again– to impeach Trump, and they will be backing the charge presented by the House of Representatives on Monday.

“He has failed the most fundamental element of the job: to support and defend the Constitution. This President should not serve one more day in office,” Pappas said.

Despite describing the Trump-inspired rioters “domestic terrorists” and placing part of the blame for their actions on the president, Sununu was unwilling to call for Trump’s impeachment. Instead, he embraced Joe Biden’s position on the subject.

“President-elect Biden has said impeachment is a matter for Congress to weigh, and I agree.”

The Washington Post reports Democrats lined up 220 votes to impeach Trump a second time, giving them the majority they need according to Rhode Island Rep. David Cicilline.

However, it will take 67 votes in the U.S. Senate to remove Trump from office and the upper chamber won’t be able to consider impeachment until January 20th — Donald Trump’s last day in office. “On Jan. 20 or 21, the Senate would proceed to consideration of the impeachment articles at 1 p.m., and officially begin the trial,” a memo from Senate Majority Leader Mitch McConnell read. “Senate trial would therefore begin after President Trump’s term has expired — either one hour after its expiration on January 20, or twenty-five hours after its expiration on January 21.”

Now Democrats are discussing a post-presidency impeachment. Rep. James Clyburn of South Carolina, the third-ranking House Democrat, says the House could impeach Trump and wait 100 days to transmit the articles to the Senate to give Biden the time to “get his agenda off and running.”

“The other problem is that since the major remedy for an impeachment conviction is removal from office, the only other punishment is to be disqualified from future office. Trump’s supporters could just say ‘Why not let the people decide? They can impose the judgment,” Yoo said.