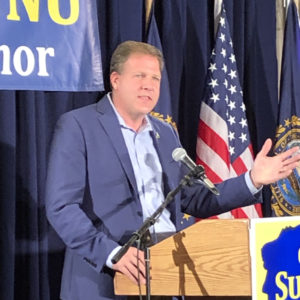 Sununu: I Expect a Biden Admin to Do Its Job for NH

Gov. Chris Sununu supported President Trump and has a close working relationship with his fellow Republican, Vice President Mike Pence. But the New Hampshire governor tells NHJournal his expectations for Washington’s treatment of the Granite State won’t change if, as appears more likely every day, Joe Biden is elected president.

“Our expectations about Washington don’t change: I expect results.  I expect them to do their job,” Sununu said shortly after winning his third term as governor. “I expect them to put politics aside and put people first, and not worry about big political agendas. I expect them to really focus on the states and communities.”

Sununu has both praised and criticized the Trump administration’s handling of the coronavirus pandemic. He’s mentioned favorably his ability to contact senior officials, including fellow Republican Mike Pence, who oversees the COVID-19 task force. But he’s also expressed his frustration with FEMA, particularly shipments of low quality or insufficient PPE.

But Sununu’s been more positive about the administration than Congress.

“Fire them all. I really mean that sincerely,” Sununu said about Congress on CNBC last month. “No one in the Senate or Congress can say that they’ve shown leadership on the COVIDcrisis. What have they done since March? Like literally nothing.”

Sununu echoed those sentiments Tuesday night. “I expect [the next] Congress to finally actually do something and stop just talking about it and actually commit to some action,” he said. “So my expectations have always been there, and I’ve been very clear about what those expectations are. And I’ve been very clear about me disappointments, whether it’s from the president’s administration or Congress.”

Sununu outperformed every other statewide candidate in New Hampshire, including Democrats Joe Biden and incumbent U.S. Senator Jeanne Shaheen. He received about 515,000 — the most for any N.H. candidate in history — and about 65,000 more votes than Shaheen.

Sen. Jeanne Shaheen’s name is frequently mentioned for a possible Cabinet position or leadership post dealing with foreign policy. (Shaheen serves on both the Foreign Relations and Armed Services Committee.)

But New Hampshire’s Republican governor could, and almost certainly would, appoint a Republican to fill any Senate vacancy — and Tuesday’s election of a GOP-controlled legislature made that task even easier. Biden would be unlikely to add another Republican senator to Mitch McConnell’s thin majority for the sake of filling an administration job.

Sununu says the threat of COVID is too important to get bogged down with partisan bickering.

“When they [Washington officials] don’t come through, I express that disappointment because my job is to focus on the ‘603’ and look out for the people in New Hampshire. So from an expectation standpoint, nothing has changed. I’m going to still hold them all accountable.”