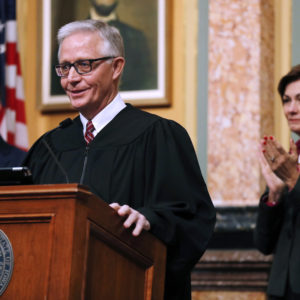 Last week, the Iowa Senate approved Senate File 2282, which requires the State Supreme Court to have a minimum of five opinions concur to declare a state law unconstitutional, one more than the majority number of four out of the sitting seven justices.

The requirement of a “supermajority” would make Iowa just the third state in the nation to require such consent, behind Nebraska and North Dakota. According to the bill’s sponsor in the Senate, Julian Garrett (R-District 13), the law is needed to reinforce the responsibility of State Supreme Court justices to base their authority in judicial review on the written intents of the state constitution, and not their own “opinions.”

“This bill corrects what I think is the problem with our system,” Garrett said during floor debate, “that it’s a tremendous amount of power to give to four judges.”

Currently, Iowa has seven seats on the State Supreme Court as of the last time the legislature amended the bench, down from nine in 2000. Of the sitting seven justices, when hearing an appeal regarding the constitutionality of a law, it only takes “four of them to throw out a law,” according to Garrett. Garrett expressed that in instances in which the legislature passes a bill with a large majority of support, and that support is shared in the governor’s office, it only takes a majority of four in the courts to strike down any legislation.

Experts agree that should such a law be passed through the Senate and the House, the beginning stages of a state constitutional crisis could begin to emerge that results in the executive branch of the state agreeing via signature to infringe upon the authority of the independent judicial branch of the state’s government.

University of Iowa Professor Timothy Hagle, who has research expertise in judicial politics and behavior, explained that the legislation is complex, in that it brings up inherent issues regarding the accountability of the court and the powers vested to each branch in the state’s constitution.

Hagle said that the first way to approach the bill could be based on its merit, on whether or not the idea is one that is good and promotes a better illustration of judicial review, and then whether or not the legislature has the constitutional authority to determine the limits of the power of the judiciary.

“Is it a good thing to say ‘well look, if you’re going to declare something unconstitutional you need more than a bare majority?’” Hagle said. “The argument is ‘well, what if you do have something that passes both chambers of the Iowa Legislature and is signed by the governor with overwhelming support and yet four of seven justices say no you can’t do that,’ does that seem appropriate in terms of democracy, and that’s an argument we can have.”

Some might argue that Iowa’s Supreme Court is already beholden to tighter democratic principles in that its judges, while appointed, come up for a public retention vote every six years, based on when his or her term on the bench began. While not dependent inherently on a vote to office, justices can be punished by the public by not being retained for an opinion he or she authored.

Iowa State University Professor David Andersen explained that such a situation occurred following the Iowa Supreme Court’s unanimous decision to declare gay marriage legal under the state’s constitution (making it the first state in the nation to do so), in which three sitting justices were declined retention in November 2010, following their decision. While that court decision would have technically complied with the new restrictions in the bill already, Andersen criticized the bill as being “an awful idea,” citing several reasons that concur with Hagle, mainly being an impending constitutional crisis.

“The Constitution of Iowa really doesn’t specify what number is needed to nullify a law and I think Iowa just goes on the conviction that it’s a majority,” Andersen said. “So it’s very questionable whether a simple law can change existing practices up to a higher threshold and of course the only people with authority to rule on that are the Supreme Court justices themselves, who are likely going to, if they were to ever hear this case, would be likely to say ‘you can’t take our power,’ which creates a constitutional crisis, because now the legislature says ‘no, the court doesn’t have this power,’ the court says it does have the power and nobody knows who’s right.”

According to Article V, Section 4 of the Iowa State Constitution, “The supreme court shall have appellate jurisdiction only in cases in chancery, and shall constitute a court for the correction of errors at law, under such restrictions as the general assembly may, by law, prescribe…” Based upon the interpretation of this text lies the legality of the legislature’s authority. According to Hagle, should the law pass, a suit could be filed in which the state supreme court justices, based on what the constitution states, would be able to give an opinion about the legality of the the legislative authority. Hagle said that the court would not be beholden to the ‘supermajority’ rules in its decision, though he said it is probable that the court would have a unanimous opinion about the legislative branch weakening its authority.

Should the state supreme court uphold the legislation based on Article V, Section 4, Andersen said that the decision by the legislature to influence the court might work in the short term, but “backfire” in the long term.

“This is the kind of thing that seems destined to backfire,” Andersen said. “When conservatives hold the legislature, they tend to try and slim down the size of government and that’s fine, you’re not really going to have too many court cases saying ‘no, you can’t slim down government,’ but when liberals start expanding government, that’s exactly when conservatives want a court to say ‘no, you’re doing too much’ and [conservatives] are going to stop [themselves] from doing that.”

The bill remains in the House. It passed the Senate by a narrow majority vote, 26-24, with all Democrats, three Republicans, and one Independent voting “no.”