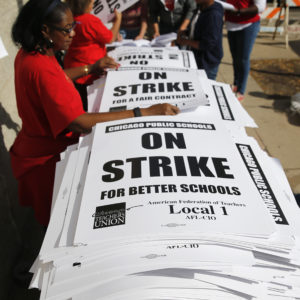 It’s been a year since the statewide teachers strike in West Virginia, and teachers around the country continue to protest disinvestment in public education, low pay and poor working conditions that stretched far beyond the Great Recession. It’s good that teachers and their unions are standing up to push for resources that will benefit students and compensate teachers like the professionals they are.

But in some places, we’re seeing other issues become part of the story around these teacher actions — issues like charter school policies that some teachers and unions oppose. It’s unfortunate that these issues are becoming linked, because it is possible and reasonable to support teachers in their fight for more resources for their students and classrooms while also supporting high-quality public charter schools.

In West Virginia, last week’s walkout was to protest poison pills added to a funding bill that would create private school voucher-like education savings accounts as well as the first public charter schools in the state. Unfortunately, this bill was yet another example creating a false link between vouchers and charter schools.

Public charter schools, while managed outside of traditional school districts, are open to all kids and face strict accountability in return for flexibility from some district rules. And they can be remarkably effective in improving results for students. Urban charters, in particular, provide an average of 40 more days of learning in math, and 28 more days in reading.

On the other hand, private school vouchers, like education savings accounts, funnel public money away from public schools. Voucher programs have little to no accountability for how public money is spent, while also removing critical protections for vulnerable students. What’s more, they can actually lead to less learning for students. Studies of voucher programs in Indiana, Ohio, Louisiana, and Washington, D.C., found highly negative impacts on reading and math scores, including for students from low-income families.

Teachers and unions rightly opposed this legislative maneuvering — and so should supporters of charter schools. It’s particularly important for charter supporters to push back on the conflating of charters and vouchers and state clearly that public money must support public schools.

In Chicago, there were strikes in December and February by unionized teachers at two charter school networks. While relatively few charter schools are unionized, that doesn’t mean the two have to be incompatible. Teachers should have the right to organize if they don’t feel their voices are being heard, and Green Dot Public Schools in California has shown what collaboration between a union and a charter network can look like. These strikes in Chicago highlight the need for transparency and collaboration to ensure that all teachers — charter school teachers as well as traditional public school teachers — have a meaningful role in developing schools’ policies.

These are not just charter school issues. Supporters of public education can stand with all teachers in fighting for better schools — both charter and traditional — without demonizing the entire charter or district sector.

The size of the charter school sector has most clearly been an issue in January’s strike in Los Angeles and the strike that began last week in Oakland, Calif. But districts have a range of financial challenges that go beyond any effect from charter schools — challenges that have manifested in Los Angeles from low levels of state per-pupil funding, the declining birth rate’s effect on enrollment, and increasing pension and health care costs.

Bans or moratoriums on charter schools aren’t going to solve those problems. And as state policymakers debate charter school policies and the appropriate size of the charter sector, they should also consider the positive results of charter schools in each city and the fact that approximately one-fourth (Los Angeles) to one-third (Oakland) of parents have affirmatively chosen charter schools.

Even if charter supporters and opponents may never see eye to eye on the appropriate scale of the charter school sector, that doesn’t mean every critique of charters should be dismissed because an opponent levels it. There are legitimate criticisms of charter policy in many locations about topics such as the performance of virtual charter schools, openness and transparency in decision making, and weak conflict of interest protections that deserve attention and improvement.

It’s unfortunate that questions about charter schools are diverting attention from the core message of these teacher protests: the need to invest in our schools, teachers and students. Instead of focusing on division, it would be powerful for teachers, unions and charter supporters to advocate together for greater investments in public education across the board. Every student deserves a building, supports and supplies needed to succeed, and every teacher — in traditional or charter schools — deserves to be treated and paid like a professional.

Neil Campbell is the director of innovation for K-12 Education Policy at the Center for American Progress. He wrote this for InsideSources.com.