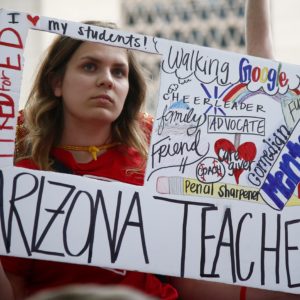 Teacher Taylor Dutro listens as protest organizers announce Arizona teachers intentions to go back to work if lawmakers pass a school funding plan, during the fourth day of the statewide teachers' strike at the Arizona Capitol Tuesday, May 1, 2018, in Phoenix. (AP Photo/Ross D. Franklin)
News

Could Teacher Strikes Wind Up Backfiring?

With comparisons to the Arab Spring revolts that swept a wave of democratization in the Middle East and North Africa in 2010, the teacher strikes of 2018 are empowering educators to take their fights for salary hikes and increases in education funding to the streets.

Beginning in West Virginia, strikes have spread to Oklahoma, Kentucky, Arizona, and Colorado. North Carolina’s teachers may be the next to hit the picket lines. The results have been a mixed bag, but the commonalities among the states have not gone unnoticed. With few exceptions, strikes are occurring in states where Republicans hold the trifecta of the governor’s mansion and both houses of the state legislature. Colorado’s Gov. John Hickenlooper is Democrat, as is Roy Cooper in North Carolina.

“It’s a lot easier for teachers to strike and agitate in a red state because they’re not worried about getting crosswise with their allies,” said Rick Hess, Resident Scholar and director of Education Policy Studies at the American Enterprise Institute.

Indeed, the tone of the strikes have shifted from what Hess called “kitchen-table issues” in West Virginia to a much harsher political divide in Arizona where the organizing group #RedforEd is led by a former Bernie Sanders staffer.

West Virginia’s educators went on strike for nine days, forcing thousands of families to scramble for childcare. They found a supportive partner in Republican Gov. Jim Justice who worked with state legislators to come up with money for a 5 percent pay hike. Modest by any standard, but teachers fought to have that increase applied to all state employees, not just those in education. The money will come from cuts in other state programs and priorities.

That teachers have a legitimate grievance about low salaries and cuts in education funding is not in dispute. In Oklahoma, the average elementary school teacher earns about $17,000 less than the national average; high school teachers earn nearly $19,000 less than the national average. Education spending there is down 28 percent over the last 10 years, the largest cut of any state. Right before teachers went on strike, the state legislature approved a $6,100 pay raise.

After nine days during which lawmakers increased taxes on online sales and expanded what kinds of games can be played in casinos, even teachers unions wanted the strike to end.

“There comes a time, when if what you’re doing is not getting the results you seek, there is wisdom in shifting focus,” said Alice Priest, president of the Oklahoma Education Association during a press conference calling for an end to the walkout. She suggested that educators turn their focus to the 2018 campaign cycle.

Arizona Gov. Doug Ducey (R) has, like many of his peers, looked for ways to restore education dollars that were cut in the aftermath of the 2008 recession. His 20 By 20 plan would give teachers a 20 percent pay hike by 2020. He has also forcefully disagreed with a recent judge’s ruling that Proposition 123 – an initiative that so far has put more than $340 million back into public schools – violates federal law.

“[The governor] has taken some pretty significant steps to show teachers he’s serious about being committed to having great schools in Arizona,” said Jonathan Butcher, the former education director at Arizona’s Goldwater Institute.

Although lawmakers are close to a budget deal that would end the Arizona strike, Butcher cautioned that school districts are the entity that determines whether teachers ultimately receive a raise and how much money gets put into classrooms. The Auditor General issued a report in March showing that in-classroom spending increased in 2017 for the first time in 13 years. Currently, 53.8 cents of every education dollar is spent on instruction. Still, when adjusted for inflation, total spending per pupil is $146 less than what it was in 2004.

“Teachers are angry and disgruntled but it’s important that districts are making these decisions,” said Butcher, who is now a senior policy analyst in the Center for Education Policy at the Heritage Foundation. “Even when you do have these big moves to add money to the [school] funding formula, if you’re filtering through districts that make decisions on who gets paid how much, there’s still a barrier diffusing who ultimately gets a higher salary.”

Meanwhile, the Denver Post has reported that teachers rallying at the State House there “were careful to say they were not just asking for higher salaries but also for more money for better buildings and programs to help bolster literacy and other academic achievement.” North Carolina’s teachers are reportedly considering whether to strike, and educators in Louisiana and Nevada are also reportedly considering similar actions.