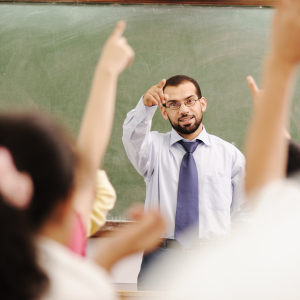 The Teacher Workforce Is Far Larger Today Than 30 Years Ago

The teacher workforce has gotten younger and more diverse as its overall size has grown by nearly 50 percent, according to an analysis of federal statistics. The growth of the teaching profession has outstripped the growth of primary and secondary school student enrollment since the late 1980’s.

Top teacher workforce academics from the University of Pennsylvania and New York University released their study of a large federal survey of American teachers that has been conducted every 3 to 6 years since the 1987-1988 school year. The last survey data included in the study was from 2011-2012. The report was funded by the National Center for Education Statistics, a research arm of the federal education department.

By comparison, the number of students in K-12 schools has only increased by about 19.4 percent, meaning that the faster growth of the teaching profession has led to a lower student to teacher ratio—from 17.3 to 1, in 1987-1988, to 14 to 1, in 2011-2012. Smaller class sizes have long been a point of emphasis for education reformers, and it appears as though advocates have been successful in effecting change on the education system.

A closer look at the growth in what has become the nation’s largest labor sector reveals some clear winners and losers in educational priorities. Math, English, natural science, and foreign language teachers have all been in demand—their numbers have doubled since the first detailed batch of data was collected. The number of teachers who specialize in English as a second language has also ballooned from 6,000 nationally in 1987-1988 to 71,600 in 2011-2012.

On the other hand, the growth in the number of CTE or vocational education teachers and art and music teachers lagged behind the average growth rates. The number of general elementary teachers also grew more slowly than the workforce educating the nation’s middle and high school grades.

The push to hire more educators appears to have led to a strain on the teaching workforce talent pool. According to the statistics, the distribution trends of teachers sorted by experience-level skewed dramatically towards beginner, or new teachers, until 2007-2008. Many of these beginner teachers spend less time in the profession, and are more highly concentrated in schools that serve high poverty communities. According to the latest statistics, a pull-back in teacher hiring in the wake of the 2008 recession, led to a slowing of what has been called the teacher “greening” trend by 2011-2012.

The report also suggests that school systems have made strides in hiring a workforce that looks more like the students they educate. While there is still a paucity of minority males who teach compared to the number of minority boys in the nation’s schools, the overall race-gap in the teaching profession has narrowed since the late 1980’s.

“Growth in the number of minority teachers (104 percent) has outpaced growth in minority students (88 percent) and was over twice the growth rate of White teachers (38 percent),” reads the report.

With over 3.6 million teachers nationally as of 2015, more than one out of every 100 Americans is a K-12 educator. Paying teacher salaries therefore takes up a huge chunk of national K-12 government spending and represents “the largest line item in school district budgets,” according to the report.

As the researchers note in their conclusion, understanding what kinds of schools are hiring which teachers and how those hiring practices affect student success could go a long way to providing insight on the best ways to allocate resources in a manner that improves America’s school system overall.