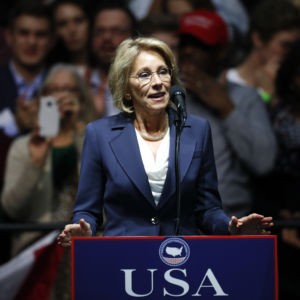 Betsy DeVos was confirmed as secretary of education Tuesday, prompting backlash from some of the top national teachers unions.

The Senate approved her confirmation after a heated partisan battle over her credentials, prompting Vice President Mike Pence to cast a tie-breaking vote. The National Education Association (NEA) and other teachers unions warn her confirmation will be harmful to children and the educational system.

“No other Trump cabinet nominee garnered the level of public opposition as Betsy DeVos and no other time in our nation’s history has a Vice President of the United States stepped in to cast the deciding vote on a nomination,” NEA President Lily Eskelsen García said in a statement. “More to the point, no nominee has united Republicans and Democrats the way DeVos has.”

Eskelsen adds her confirmation will only embolden opponents throughout the education system and country. Pence breaking the partisan gridlock marked a historic vote. Vice presidents have the authority to break Senate ties but it’s never been done for a cabinet nomination.

“The level of energy is palpable,” García said. “We are going to watch what Betsy DeVos does. And we are going to hold her accountable for the actions and decisions she makes on behalf of the more than 50 million students in our nation’s public schools.”

DeVos earned adamant supporters and critics for her support of school choice. Those opposed also argued she was unqualified for the position and failed to answer hearing questions adequately. The American Federation of Teachers (AFT) described the tied vote as significant.

“It’s telling that even when Trump had full control of the legislative and executive branches, he could only get DeVos confirmed by an unprecedented tiebreaking vote by his vice president,” AFT President Randi Weingarten said in a statement. “That’s because DeVos shows an antipathy for public schools; a full-throttled embrace of private, for-profit alternatives; and a lack of basic understanding of what children need to succeed in school.”

The NEA notes that her nomination has already sparked rallies, a flood of phone calls and millions of emails. DeVos is just one of several nominees that have faced fierce opposition. Nevertheless, her supporters hope that she will bring balance and needed reforms to the education department.

“Betsy is a passionate, hands-on advocate for school reform,” American Enterprise Institute President Arthur Brooks said of her nomination in November. “She is a true champion for the competition of ideas. She pursues innovative solutions in education by engaging all players, from policymakers to reformers to parents and community leaders”

Brooks added that her strong convictions for education reform came at a pivotal time. The White House did not respond to a request for comment by InsideSources.