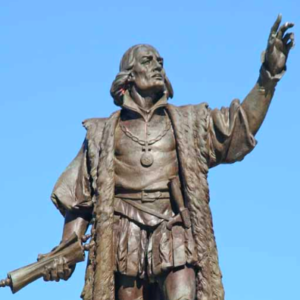 And they both want to dump Columbus Day.

During the “lighting round” of the WMUR TV debate, both candidates were asked if they supported a move proposed last year in the New Hampshire state legislature to replace Columbus Day–traditionally a day viewed to celebrate Italian-American culture– with “Indigenous People’s Day.” Neither candidate hesitated a moment before throwing Columbus under the bus….er “boat.”

There are more than 100,000 Italian-Americans in New Hampshire. Do they support getting rid of Columbus Day in the name of political correctness?

“I think it’s crazy,” State Senator Lou D’ Allesandro (D-Manchester) told NHJournal after his party’s gubernatorial debate. “They can have an ‘Indigenous People’s Day’ some other day. We’ve had Columbus Day a long, long time, and we see it as a day honoring Italian-Americans and our culture. Trying to get rid of Columbus Day is an affront to Italian-Americans everywhere,” D’Allesandro said.

A year ago, Durham, N.H. became the first New Hampshire town to get rid of Columbus Day in favor of Indigenous People’s Day. Their statehouse representative, Wayne Burton, (D-Durham) wrote a bill to take the change statewide. It didn’t get out of the NH House.

“I see this as a slap in the face to Italian heritage,” Republican State Rep. Al Baldasaro said at the time.  The state of Vermont, however, has already made the change and there is a push south of the border in Massachusetts to do the same. And Massachusetts has a significantly larger Italian-American population than the Granite State.

A Marist poll taken last October found that 57 percent of Americans believed that celebrating Columbus Day is a “good idea,” while only 29 percent oppose the holiday.