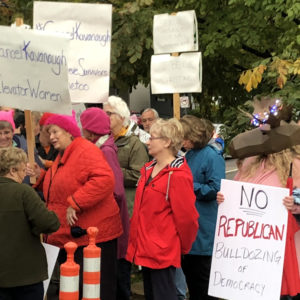 One of the unintended consequences of the noisy, national debate over Judge Brett Kavanaugh is the impact it’s having on elections taking place far from Washington, DC. And for Molly Kelly’s gubernatorial campaign, those consequences are, surprisingly, not good.

On paper, an issue that energizes the Democratic base and women voters—the two key targets of the Kelly campaign—would seem like a good thing.  Every New Hampshire Democrat who decides they’re going to cast an anti-GOP protest vote this November is a vote for Molly Kelly. That’s the good news.

The bad news is that Molly Kelly already had those votes in the bag.  Angry, energized Democrats didn’t need an allegation of sexual assault against Brett Kavanaugh. They already have the confirmed “p—y grabber” in the White House, Donald Trump.  Polls showed high Democratic motivation for the midterms weeks before Democrats made the Kavanaugh allegations public.

Republican enthusiasm, on the other hand, had been lagging.  In July, the Washington Post-Schar School poll found that 58 percent of Democrats and Democrat-leaning voters were pumped up about voting in the midterm election, while only 38 percent of GOP voters said the same.

Not anymore. A new Gallup poll puts partisan turnout at 61 percent among Democrats/leaners and 58 percent for Republicans.  “Democrats and Republicans are now expressing a fairly high certainty of voting, with 72 percent and 70 percent, respectively, saying they are absolutely certain they will vote in November,” says Lydia Saad of Gallup.

The challenge for Molly Kelly is that, because there are slightly more registered Republicans than Democrats in New Hampshire, any issue that drives up net turnout means driving up Republican turnout.  That doesn’t mean some Republican women won’t vote Molly Kelly. Some certainly will. But more Republicans is a net negative for any Democratic campaign.

“The Kavanaugh situation is motivating lower propensity Republican and undeclared voters to get to the polls.  The Democrats’ and media’s handling of this story has inflamed conservatives and many moderates,” says veteran New Hampshire Republican Bryan Gould.

Then there are the mechanics of running a campaign as a challenger against a popular incumbent.  No public polls have shown Kelly with a lead,  and Sununu’s approval/disapproval rating has been at least +20 in every poll.  Even in the new ARG poll that has Kelly within 5 has Sununu’s approval at 56-28 percent.

The Kelly campaign needs the political ground to shake, to get voters to take a different look at Gov. Chris Sununu and the campaign. When every political conversation begins and ends with the word “Kavanaugh,” that’s hard to do.

“It looks like, for the moment, the Kavanaugh story has frozen the Kelly campaign in place–never good news for a challenger who’s trailing,” said longtime GOP consultant David Carney. “Of course that could all change, based on how the Kavanaugh story plays out.”

“And where is the Democratic Governor’s Association?” Carney asks. “Their silence is deafening.”

You can’t say Molly Kelly isn’t trying. She is pushing hard to get voters to link Sununu, Trump and Kavanaugh. She’s hitting Sununu hard over his letter endorsing Kavanaugh earlier this summer, running online ads reminding voters of the governor’s support for the SCOTUS nominee.

So far, however, it hasn’t stuck. The same Morning Consult polls that find President Trump under water in New Hampshire by double digits also named Sununu the 4th most popular governor in America. The NHJournal poll in July put Trump’s approval at 41 percent but Sununu’s up at 55 percent. The available data suggest that New Hampshire voters are unwilling to label Sununu a “Trump Republican.”

For his part, Sununu has carefully navigated the Kavanaugh by closely following the lead of moderate GOP Senator Susan Collins. As long as he stays in her political slip stream, he’s a hard target for Kelly to hit.

The Kavanaugh issue isn’t settled. It’s a political hand grenade that could still explode on the GOP—and all Republican candidates.  And neither Gov. Sununu nor Molly Kelly have even hit the airwaves in the general election ye, so this race is far from over.

But for the moment, every day the Kavanaugh confirmation dominates the political conversation in the Granite State is another day Kelly can’t get her message out to potential crossover voters she needs to win.

“It’s quiet out there right now,” a source close to the Sununu campaign tells NHJournal. “And quiet is good.”