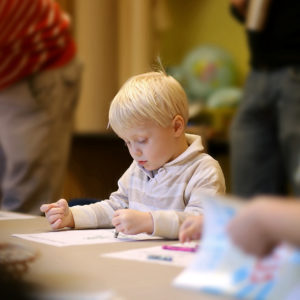 The Opportunity Cost of ‘Early Childhood Education and Care’

The head of the state’s newly created Early Childhood Education and Care Department boasts that she will be taking things to a higher level. That process, Elizabeth Groginsky told the Santa Fe New Mexican, “starts with collecting data.”

Here’s some data that isn’t likely to interest the Land of Enchantment’s latest cabinet secretary: Since taxpayers began shoveling revenue at the preschool-industrial complex, there has been no improvement in the reading aptitude of New Mexico’s fourth-graders.

Then-Gov. Bill Richardson promised that 2006 would be “the year of the child.” He “proposed doubling the annual state appropriation for prekindergarten, beginning in fiscal 2007, to $10 million a year, and adding $1.5 million in one-time spending for various items.”

Richardson got what he wanted, and much more. Between 2005–2006 and 2017–2018, inflation-adjusted funding for preschool rose by a factor of 7.5 — and enrollment nearly sextupled. In addition, a host of other “investments” targeted at the youngsters — e.g., an “early reading initiative,” home visitations, an extended school year — were established or expanded.

Results? Essentially, zilch. In 2007, 23.96 percent of the state’s fourth-graders were reading “at or above proficient,” by the standards of the National Assessment of Educational Progress (NAEP) — often referred to as the “Nation’s Report Card.” By 2019, “progress” amounted to 23.72 percent making the mark. (The average score fell from 211.63 to 207.56.)

Mouthpieces for the schooling monopoly, and the greedy pols who can be counted on to do the bidding of the state’s biggest lobbying force, refuse to face the truth. But it’s abundantly clear that “early childhood education” does not live up to its promoters’ hype.

In a 2018 analysis for the left-leaning Brookings Institution, Grover J. Whitehurst explored “enrollment of four-year-olds in state pre-K and differences in the performance of students in those states on the [NAEP] five years later.” He concluded that there were “no … substantive positive changes in student achievement that can be reasonably attributed to increases in access to state pre-K programs.”

Whitehurst, the founding director of the U.S. Department of Education’s Institute of Education Sciences, confirmed what honest scholars have understood for some time.

In 2014, the Cato Institute’s Neal McCluskey noted that “longitudinal, ‘gold-standard’ research results” from investigations of a beloved Great Society program reveal that “the modest advantages accrued early on essentially disappear by first grade … as if Head Start never happened. And federal studies released by the Obama administration are what report this.”

Even The Washington Post was willing to report, in 2016, on a Vanderbilt University project that compared “cohorts of Tennessee pre-K students with their peers who applied to the statewide pre-K program but were lotteried out.”

However well-intentioned, interventions in young children’s lives can do little to compensate for slothful, illiterate, chaotic and violent households. In a hearing brief issued last summer, the LFC bemoaned the state’s “persistent and generational low socio-economic outcomes.”

New Mexico’s illegitimacy rate is 51.7 percent — the third-worst in America. Its dropout rate is rock-bottom by a country mile, with 71 percent of government-school freshman graduating “with a regular diploma within 4 years of starting 9th grade.”

Just a week ago, the LFC lamented that New Mexico has “long had some of the highest rates of alcohol and drug abuse in the country, and the problem is getting worse.” Its suicide rate is one of the worst in the nation.

Decades ago, the cowardice of the Land of Enchantment’s clergy, nonprofit executives, business owners and elected officials congealed into a contemptible conspiracy of silence.

Rather than tell the truth about New Mexicans’ rampant self-destructiveness, community “leaders” decided to avoid making any judgments, and hoped that expensive government programs would somehow produce the kind of child well-being prevalent in places like New Hampshire, Utah, Connecticut, Iowa and Minnesota.

New Mexico can spend more attention and resources on bureaucracy and welfare, or it can finally face the facts about the ruinous habits of so many of its residents. By choosing the former, it squanders opportunities to address the latter. And the children continue to suffer.