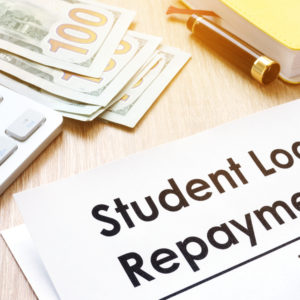 The Shady Side of Student Loan Forgiveness

As the collective student loan debt in the U.S. surpasses $1.7 trillion, President Joe  Biden’s administration is gearing up to provide over $11.5 billion in student loan relief for nearly 600,000 borrowers. In addition to the fiscal nightmare this will pass onto taxpayers, it has also created a predatory market that thrives on selling student data and information.

Student loan debt has been accumulating at an alarming rate, increasing by more than 100 percent in the last decade alone. Perhaps more alarming is that of the 43.2 million student borrowers in debt within the United States, each owes an average of $39,351. Currently, there are some student loan forgiveness programs through the federal government for specific circumstances, such as for public employees or doctors who work in rural areas. But one loan forgiveness program in particular is becoming increasingly problematic: Borrower to Defense Repayment (BDR).

BDR loan forgiveness operates on the basis that a college defrauded a student by failing them on the educational services provided. While there are surely legitimate claims through BDR, there are also alarming loopholes within the rules that allow for massive amounts of student debt to be unjustifiably forgiven at the taxpayers’ expense. As noted in a study from the University of Chicago, student debt forgiveness favors the top 20 percent of earners, meaning it is more of an expensive bailout for educated and generally well-off individuals at the expense of all taxpayers, many of whom did not even go to college. Interestingly, those who rack up large amounts of student debt typically come from more affluent families and run up their tab by attending out-of-state private schools, while those from lower-income backgrounds are more likely to make cost-saving decisions and reduce the amount of debt they take on. If the loopholes within BDR loan forgiveness persist, then taxpayers could be on the hook to pay for the billions of dollars worth of loans forgiven.

What’s perhaps even more alarming is just how these BDR claims are coming to fruition. Recently, a handful of companies have popped up with information or offers to assist those looking for help with the loan forgiveness process. Although these services seem well-intentioned, their goals are actually quite nefarious. They specifically market to students to collect their data to sell to trial attorneys as leads for potential lawsuit claims, all unbeknownst to the student. As one might suspect, this has turned many trial attorneys’ dreams into reality, as more frivolous class action lawsuits are being filed against colleges thanks to these predatory recruiting ads. This is effectively opening up every private educational institution to massive claims or losses.

While calls for student loan forgiveness continue, it is important to look at what is specifically driving this debt to skyrocket. One key factor driving student loan debt is federally-backed student loans. Research shows that for every dollar of federal aid, institutional grant aid is reduced by $0.83, meaning the intended reduction of costs from federal aid is offset significantly by reductions in institutional aid and leads to students increasing their loan amount since they are not actually benefiting from more affordable tuition. In addition to federally-backed student loans, overly bloated administrative costs are also driving up tuition prices. Administrative costs cover non-instructional staff who are not directly contributing to educating students within the classroom. Although administrative staff is shown to have very little impact on graduation rates, administrative costs managed to increase by 61.2 percent from 1993 to 2007. Today, the cost of tuition is up 361 percent since 1963 (inflation-adjusted), and the average student attending a 4 year-public college will need $26,615 for the academic year when factoring in the price of tuition, room and board, books, and other necessities.

With the price of a college education being so expensive, it is understandable how collective student loan debt within the United States got to the amount it is at today. However, there are better solutions to address this debt than pushing the financial burden into taxpayers through loan forgiveness schemes. Instead, policymakers should address the rapidly rising costs of attending college and close the glaring loopholes within Borrower to Defense Repayment. Not only would this save billions of dollars and actually make college more affordable, but it would also minimize the opportunity for predatory companies to take advantage of vulnerable students by invading their privacy and selling their information to tort lawyers.

Elizabeth Hicks is the U.S. Affairs Analyst with the Consumer Choice Center. She wrote this for InsideSources.com.