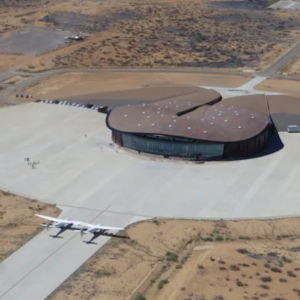 Posted to Technology May 17, 2019 by Hiram Reisner

Billionaire Richard Branson is finally bringing his vision of the final frontier to the Spaceport America facility near the town of Truth or Consequences in Southern New Mexico. The move will make New Mexico the first location for Branson’s dream of creating “Space Tourism.”

At a May 10 news conference, the private firm’s owner said Virgin Galactic’s development and testing program of the space passenger rocket made it ready for relocation.  George Whitesides, the company’s CEO, said a small number of flight tests are pending before the first commercial flight, but he wouldn’t set a date for the long-awaited launch.

The move comes after the spacecraft completed two test flights from the Mojave Air and Space Port in California, both reaching an altitude of more than 50 miles. On the second flight, there was a civilian aboard for the first time: Beth Moses, Virgin Galactic’s chief astronaut instructor.

The flights were deemed a success and led to the decision to move to New Mexico.

“Our Virgin Galactic adventure has been intertwined with New Mexico and Spaceport America right from the start, and our stories have unfolded together,” Branson said at the news conference.

“With today’s announcement, New Mexico will become the first place on this beautiful planet of our’s to regularly launch humans into space,” Branson said. “Rarer still, is that those launches will be conducted by a private company.”

More than $200 million in taxpayer funding was used to construct Spaceport America and the facility opened in 2011. But delays in Virgin Galactic’s SpaceShipTwo rocket plane development — including a fatal crash in 2014 — set the agenda back more than three years.

Whitesides said Virgin Galactic will add about 100 jobs in New Mexico, including pilots, mechanics, engineers and hospitality hosts. The company currently has around 45 employees in the state.

In the news conference, Branson thanked New Mexico politicians and residents for their patience.

“Our future success as a species rests on the planetary perspective,” Branson said. “The perspective that we know comes sharply into focus when that planet is viewed from the black sky of space.”

Branson’s plan includes hotels in space and spaceports for transcontinental travel anywhere on earth in supersonic time. He also stressed the obvious: Fulfilling his vision will be expensive.

“We need the financial impetus to be able to do all that,” he said. “If the space program is successful as I think … then the sky is the limit.”

Hundreds of prospective clients have already paid $250,000 for tickets for the 90-minute suborbital flights. Included will be celebrities like Justin Bieber and Leonardo DiCaprio.

Branson wants to be on the first commercial flight, which he has said he hopes will coincide with the July 50th anniversary of the Apollo 11 launch.

Whitesides added the importance of New Mexico being the ultimate spot for the company’s launch of space tourism.

“The first photograph of Earth from space was taken over New Mexico in October of 1946,” Whitesides said in a statement.

“How inspiring and appropriate that the state will soon host the first regular commercial spaceflight service, which will enable thousands of people to see Earth from space with their own eyes.”

By Gerard Scimeca on June 20, 2022
The enduring image of the old American west, as propagated into our consciousness through film…
Read More