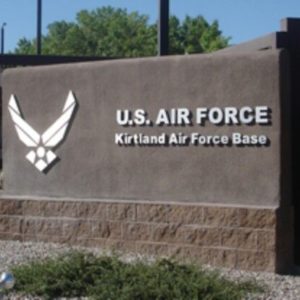 Four military bases in New Mexico are among more than 100 U.S. installations in danger of exhausting their water supplies, because they have not adequately monitored their reserves, according to a recently released U.S. Government Accountability Office (GAO) report.

The New Mexico military installations listed in the GAO report are the White Sands Missile Range — which comes under U.S. Army jurisdiction — and Kirtland, Holloman, and Cannon Air Force bases.

The Army and Air Force depend on water to support training, weapons testing, fire suppression and sanitation, according to the report, “DOD Has Not Always Followed Leading Practices to Identify At-Risk Installations.” The GAO noted 102 military installations faced water scarcity.

U.S. Air Force spokesman Robert Leese told InsideSources water scarcity at New Mexico bases is not impacting operations, nor is it anticipated lack of water will be a future problem. Leese also said the GAO report was limited in scope.

“The GAO report cited looked at the various methodologies in place to evaluate water scarcity risks; it did not evaluate the likelihood of future issues (i.e., just because an installation was on one or more of the evaluated lists, does not indicate they are facing immediate risks),” he said. “At this time, the Air Force does not anticipate any impacts to future mission and non-mission activities at Holloman, Kirtland, or Cannon Air Force Bases.

“The Air Force is looking to the future to ensure installations have adequate water supplies to achieve missions,” Leese said. “For example, Cannon AFB is implementing water-conservation methods, using water-saving fixtures, and utilizing treated wastewater to irrigate parks and public landscaping. Although the infrastructure is sufficient, the water supply is declining, and additional sources of water are being pursued.”

Leese noted that Kirtland is looking to “develop future infrastructure upgrades that increase efficiency and improve reliability over the next 25 years.”

Congress directed DOD — beginning in 2015 — to perform three assessments to pinpoint installations risking water scarcity. The three military departments have also required such assessments. The GAO analysis comes after DOD issued a report in January pointing out military installations at risk of not having enough water.

Kirtland was one of only three bases across the country listed in three government assessments as at risk, according to the GAO. White Sands Missile Range was the sole Army installation that appeared in all three water scarcity reports from the OSD.

New Mexico U.S. Rep. Xochitl Torres Small, a member of the House Armed Services Committee, said she has focused on the issue.

The National Defense Authorization Act (NDAA) — the Defense Department spending bill —passed in the House of Representatives last Wednesday and is expected to pass in the Senate this week.

The NDAA includes New Mexico delegation legislation that provides relief to communities and businesses affected by PFAS contamination in groundwater around Air Force bases in the state and nationwide — including dairy farms that have been devastated by the chemicals that seeped into groundwater from the nearby Cannon Air Force Base.

PFAS — or per- and polyfluoroalkyl substances — are toxic chemicals that can move through groundwater and into the food chain. The chemicals can increase serious cancer risk; affect children’s growth and learning abilities; and interfere with a person’s immune system. They’re sometimes referred to as “forever chemicals” because they can take thousands of years to degrade.

The New Mexico bill calls on DOD to take measures to prevent human exposure, including through agricultural products; provide alternative water or water treatment for contaminated agricultural water; and acquire neighboring contaminated property. It also mandates that DOD create a plan of action to clean up contaminated sites nationwide and take all necessary steps to prevent further risks to public health.

“The Department of Defense says they lack authority to help farmers and ranchers with contaminated water, and our bill fixes that problem,” said U.S. Sen. Tom Udall, one of the bill’s sponsors. “The evidence is clear that these chemicals are toxic, and we must act proactively to ensure further damage does not spread through the food chain.”