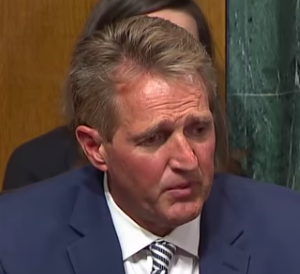 The Week That Wasn’t? Few Believe the FBI Probe Will Follow a Seven-Day Script

When Sen. Jeff Flake (R-AZ) announced his decision to withhold his support from Judge Brett Kavanaugh’s confirmation until after an FBI investigation, he made it sound like a simple plan:

“I thought, if we could actually get something like what he was asking for—an investigation limited in time, limited in scope—we could maybe bring a little unity.”

But to paraphrase Field Marshal Melmuth von Moltke, no plan ever survives first contact with partisanship, and literally within minutes of his announcement, Democrats were already dismissing Flake’s FBI investigation as inadequate.

At 2pm Friday afternoon, ThinkProgress’s Judd Legum tweeted out, “Why should an FBI investigation of a nominee for a lifetime appointment be limited to one week?”

Why should an FBI investigation of a nominee for a lifetime appointment be limited to one week?

The liberal magazine The Nation immediately gave Flake’s good-will gesture the back of their hand: “Note to Jeff Flake: A Limited FBI Investigation of Brett Kavanaugh Is Entirely Insufficient.”

This was precisely what many Republicans, who view Sen. Flake’s flip on the FBI issue as both naive and self-aggrandizing, predicted: No matter what happens this week, Democrats–who’ve already announced that they will reject the Kavanaugh nomination regardless of the FBI findings–will declare it insufficient and demand more time and investigations. The “week” Democrats envision is one that lasts until after the November midterms.

“I think they’re doing the Democratic Party, of which I am a proud member, a disservice,” Elleithee added.

Republicans agree that the entire effort is about delay, as opposed to determining the facts of an uncorroborated accusation from the 1980s. Conservative talk host Hugh Hewitt hit the airwaves Monday morning pushing a calendar in which a “week” of investigation is really a couple of days.  “I’m hoping the Republicans vote for cloture on Wednesday, and have a final vote on Thursday or Friday.”

Jake Sherman at Politico Playbook sees a similar calendar ahead: “AND REMEMBER … This probe is not really a weeklong investigation. The vote on cloture could be Friday.”

Republicans certainly hope so. Meanwhile, they want to use the week ahead to highlight the findings of Rachel Mitchell, the Special Victims Unit attorney they brought in to question Dr. Christine Blasey Ford. “I do not think that a reasonable prosecutor would bring this case based on the evidence before the committee,” she concluded. Rather than a “he said, she said” case, Mitchell wrote, “this case is even weaker than that. “Dr. Ford identified other witnesses to the event, and those witnesses either refuted her allegations or failed to corroborate them.”

But Democrats have never treated the Kavanaugh case like a criminal investigation. It’s always been a political battlefield and they have no interest in a cease-fire in a war they believe is an exercise in GOP self-defeat.  “It’s like they [Republicans] have a strategy to get their support from suburban women down into the teens,” said Alixandria Lapp, the president of Democrat’s House Majority PAC.

For their part, Republicans may not have a choice.  The GOP base is angry over what they believe has been a Democratic dirty-tricks campaign to smear Judge Kavanaugh and, while there’s no natural connection between the judge and grassroots Republicans—most of whom had never heard of Kavanaugh before this summer—he has become a stand-in for the broader battle between the Trump base and the DC/media “elites.” And the GOP wants to win.

GOP voters will wake up every day this week looking for signs of weakness from their party’s leadership.  And every day the Democrats’ strategy of “delay for the sake of delay” becomes more obvious, the more the base will demand that that GOP stand up to it.  Republican voters are already angry over Sen. Flake’s decision to, as Andrew McCarthy puts it at National Review, “give the Democrats exactly what they wanted.” If the Republican leadership lets the Democrats move the goalposts on the Kavanaugh confirmation yet again, these voters will be furious.

There is a small glimmer of hope for the GOP: If, as expected, the FBI investigation turns up no corroborating evidence for Dr. Ford’s allegation, and the investigation itself is broad enough to be viewed as credible, voting no will be more difficult for Sen. Flake or his GOP colleagues Sen. Susan Collins (R-ME) and Sen. Liza Murkowski (R-AK).  It will also ratchet up pressure on red-state Democrats like Sen. Joe Manchin, where a poll taken after the hearings found West Virginians supported Kavanaugh’s confirmation, 58-28 percent.

In fact, Democratic Sen. Joe Donnelly of Indiana appears to have moved away from his previous “No” to “I’m awaiting the results of the FBI investigation” already.

However, the more likely scenario is that, in this moment of high political passion, more allegations will be made.  Will they be of the “Avenatti” variety? Perhaps. But some Senate Democrats have shown a willingness to embrace even these outlandish claims of a secret, teen-run “gang rape” club in Kavanaugh’s small Catholic school circle. “I’m very concerned about this because the White House should not be allowed to micromanage an FBI investigation,” Amy Klobuchar (D-MN) told CNN.  “I think she [Swetnick] has to be interviewed by the FBI. I believe in due process, she did sign an affidavit.”

Meanwhile, Democrats are also pushing ahead with their other strategy for the week: Change the subject. And their new focus is on Judge Kavanaugh’s drinking in college.

Over the weekend they launched what Axios calls the “angry drunk” argument, based on claims by people who attended Yale with Kavanaugh that he was, as another Yale classmate, Liz Swisher, put it, “a sloppy drunk.” Look for new lines of attack as the week rolls out, in an attempt to keep the GOP from being able to get the votes needed for cloture by Friday.

Republicans like Sen. Lindsey Graham are prepared to fight: “I think you’re trying to portray him as a stumbling, bumbling drunk, gang rapist, who during high school and college was Bill Cosby. Six FBI background checks over the years would have uncovered this.”

But he’s not one of the Republicans who matter.  Jeff Flake is. And nobody knows where his vote—or this debate—will be at the end of this very long week.