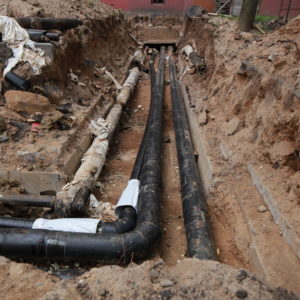 To Fix America’s Water And Sewer, Focus on Partnership and Plans, Not Taxes

Infrastructure was the word on everyone’s lips on Wednesday, when five cabinet secretaries appeared on Capitol Hill to discuss President Donald Trump’s infrastructure proposal before the Senate Committee on Commerce, Science and Transportation. The lengthy name of the committee alludes to the complex nature of America’s present infrastructure needs. Even though discussions of the future of roads, bridges, and the gas tax are common, America’s water and sewer systems are also in desperate need of investment. At the same time, speaking at symposium hosted by Faegre Baker Daniels, industry figures discussed how to encourage cities and municipalities to invest in water and sewer pipes, stressing over all a need for regulatory certainty. The solution is not just additional funds, but also changes in federal government oversight structures, and incentives for state and local governments.

“People kind of take it for granted, but we are coming to a point where water systems around the country are failing,” said Congressman Bill Shuster (R-Pa.), chairman of the House Transportation and Infrastructure Committee.

In many cases, municipalities lack the funds necessary to repair and maintain their water and sewer systems and are hesitant to raise rates. Years of this behavior have left many systems in need of an influx of funding. While observers are understandably nervous about projects that require federal subsidies to be productive, in order to invest in rural areas, such subsidies are necessary.

“You don’t have enough people to build a four-lane highway and maintain it if you live in a rural part of the country,” said Shuster, who explained that more populous cities generally subsidized rural roads to the tune of 50 to 70 percent. The same is true of the instate highway system in sparsely populated western states like Montana.

On the whole, however, these investments are seen as helping the country overall by facilitating trade between states. Meanwhile, investments in water and sewer systems have been more sporadic, often because these systems are ignored unless they are broken. As a result, the country needs to work through decades of water and sewer maintenance backlog, a process that will likely require both significant capital expenditures and potentially rate hikes.

“We need to get people involved,” says Michael Sargent, a policy analyst for infrastructure and transportation at the Heritage Foundation, “to explain the need for investment and that infrastructure isn’t free.”

When it comes to handling improvements to drinking and wastewater treatment plants, asset recycling is increasingly being discussed as a potential solution. The idea mimics a program used successfully in Australia, where pre-existing publicly-owned infrastructure facilities were leased to private companies. These companies then took over the operation of the facilities, frequently adding in their own investment dollars. To many, this approach seems like a win-win situation, allowing municipalities to gain both revenue and improvements.

The program is one potential way of dealing with a very large need for additional investment. Water infrastructure alone requires around $350 billion in new investment.

In part, the difficulties facing water and sewer infrastructure reflect the reality of an industry that is both fragmented and managed from the top down. Since most small towns run their own water treatment systems, there are tens of thousands of water treatment facilities operating with fewer than 10,000 customers. At this level, it is difficult to take advantage of economies of scale. Meanwhile, each of these treatment plants must meet standards imposed by the upper levels of government.

The elephant in the room is if Congress will be willing to spend a significant amount of money to allow for these improvements. Although infrastructure generally has favorable numbers, it has proven much more difficult to find dollars to put them into action.

“Why are infrastructure projects so uncertain when infrastructure remains so popular?” asked Ryan Lindsey, executive director of government relations at CRH Americas Materials.

When funding is uncertain, municipalities are incentivized to divide projects into stages which can be completed in sequence as money allows. The trouble with this approach is that it generally increases the cost in dollars and time of completing larger projects. In order to save money overall, legislators have to be willing to commit to more spending upfront, says Lindsey, who wants to see the matter put to a direct vote, rather than dying in debates over details.

On this, Alex Herrgott, associate director of infrastructure for the president’s Council on Environmental Quality, agrees.

“If you want to get this done, you don’t lead with how you pay for it,” Herrgott said of infrastructure proposals. “That can be a distraction from actual policy.”

Instead, he said the White House was treating the infrastructure question as a conversation, inviting local and regional players to come for listening sessions to learn which areas they would like to see addressed. The approach recognizes that in the federal/local infrastructure partnership, the federal government provides more in the way of leadership and expertise than funding. After all, federal grants will cover at best a fraction of the overall costs and, as Hergott reminded, all federal dollars first came from somewhere.

“At the end of the day, all federal dollars start as state and local dollars,” he said. “I think sometimes people forget that.”

Under the current proposal, the federal government would spend $200 billion over 10 years on infrastructure, including water and sewer systems, roads, and broadband. Half of that money would be structured as incentives, aimed at encouraging investment on the state and local level. For water, this could provide an opportunity for water districts to consolidate some or all of their operations, allowing them to take advantage of shared expertise and lowered overhead costs.

As Congress moves further into the year, there is a lot on the table when it comes to infrastructure. What might be the most worrisome detail has little to do with the plan itself though. Instead, it is the coming elections, which make legislators hesitant to commit to large amounts of spending and also raise regulatory uncertainty. Although this Congress and president may support infrastructure, the same cannot necessarily be said of future officeholders. Even as the administration works to advance its plan, figures from in and outside of industry stress that America’s laws need to become more predictable.

“We are essentially on par with the third world when it comes to regulatory uncertainty,” said Sargent.

Hopefully Congress will have time to address that before November.