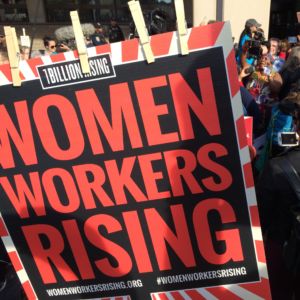 A Day Without a Woman protest (Connor D. Wolf/InsideSources)
News

What Today Means for Black Women and Pay Equality

A black woman would have to work seven additional months on average to get the same pay as a white man last year, according to research that was highlighted Monday.

Black Women’s Equal Pay Day is being used to discuss the issue by showing how many more months a black woman would have to work into 2017 to earn as much as a white man in 2016. Labor unions and progressive groups are taking to social media and holding events throughout the day to bring attention to the issue.

The Economic Policy Institute (EPI), a progressive research nonprofit, calculated the pay difference in a study Friday. The research found black women are paid only 67 cents on average for every dollar a non-Hispanic white man makes. Education, years of experience, and location were taken into account to factor for influences aside from discrimination.

“Folks generally understand or know about gender pay equality,” EPI researcher Valerie Wilson told InsideSources. “There are significant differences in gender pay gap when we account for race. So today signifies that day that African American women actually catch up with what white men earned in the previous year.”

Wilson currently serves as the director of EPI’s Program on Race, Ethnicity, and the Economy (PREE). She was among the team of researchers that helped calculate the pay difference for black women. She hopes the day will draw attention to the issue so that more people are aware and can start talking solutions.

“Getting attention is just the beginning of it,” Wilson said. “The next step beyond that is we want people to take action on closing the gap. It’s one thing to know about it, it’s another thing to move forward with solutions to reducing or eliminating the gap.”

Black Women’s Equal Pay Day is already drawing significant attention. Labor unions have utilized social media to highlight the issue in a series of posts. The Center for American Progress held a panel discussion with several experts to highlight the problem. Tennis legend Serena Williams argued in an opinion piece for Forbes that the day is helping to shine a light on an issue that is often neglected.

Wilson and the rest of the research team based their findings on data from the Current Population Survey (CPS). The CPS is a monthly survey of about 60,000 households conducted by the U.S. Census Bureau. The team used hourly wages to account for hours worked by individuals while also remaining consistent when comparing different groups.

“A lot of that difference can be attributed to discrimination because the other factors that we can reasonably expect to account for differences in pay don’t eliminate the gap,” Wilson said.

The gender pay gap has been disputed by some critics over how much discrimination actually plays a role. They have contested the claim often misses nuances that could account for the difference. Harvard Economics Prof. Claudia Goldin questions the approach of the recent research.

“My views and those of EPI agree on some points and disagree on others,” Goldin said in an email to InsideSources. “In this case, they are looking at lots of raw differences (e.g., by education level; by hours; by weeks). They could do the same for white women versus white men. We shouldn’t attribute all the difference to bias and possibly not even much at all. This isn’t an easy problem and the exercise makes it look far, far easier than it is. It trivializes the issues.”

Lawmakers and researchers have put forth numerous solutions on how to address wage inequality generally. Some have suggested raising the minimum wage while others have looked at underlying economic concerns like productivity. Wilson notes a good first step is simply enforcing the law.

“One part of it is really enforcing the laws we already have in place in this country that prohibit discrimination in pay on the basis of race, ethnicity, gender, national origin, sexual orientation,” Wilson said. “We have laws already against pay discrimination, yet it still happens.”

Wilson adds pay transparency can help improve enforcement by allowing people to know when their pay is unfair. A worker could find it difficult to determine if they are the victim of wage inequity if they don’t know what their colleagues are being paid. Making it so workers can more easily compare their wages with others could help avoid that problem.

“When you have an issue of pay discrimination it’s specific to your employer,” Wilson said. “It’s one thing to have the national numbers out there for everyone to see, but the individual has to know within their company that they’re not being paid the same.”