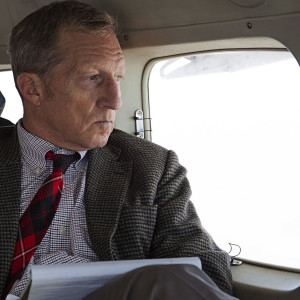 During the 2016 campaign, California billionaire Tom Steyer donated nearly $90 million to Democratic candidates but got a poor return on his investment. The very next morning, the Los Angeles Times began asking if he might be prepping for a gubernatorial run in 2018. Steyer has yet to make an official announcement on the race, but his poll numbers have hovered around 5 percent, 21 points behind the frontrunner. With the future of his potential candidacy looking rocky, Steyer opened up a new public relations front on Twitter. Steyer’s tweets ignore his own ties to Russia while calling for investigations into the Trump administration.

Investigating the Trump administration for ties to Russia is one of Steyer’s favorite tweet topics. In the past week, he brought up Russia nearly every other day.

Trump may deny working with Russia to win the White House but he sure is acting guilty.

Something's rotten in Washington. We need to know the truth about Trump's ties to Russia. Serious reckoning ahead.

Steyer’s Twitter followers hear less about the billionaire’s own ties to Russia, where as the lead in hedge fund Farallon Capital Management, Steyer made millions from investments in petroleum companies. One of these investments involved dealing with a Russian energy czar who was a confidant of Vladimir Putin.

In the early 2000s, Farallon Capital Management, the firm where Steyer served as managing partner, invested in Geotech Services, one of the largest oilfield exploration companies in Russia. Geotech was one of the companies most responsible for the development of Russia’s energy resources in the post-Soviet period. In 2010, Farallon Capital sold a portion of its stake in Geotech Services to the Volga Group, a privately-held Russian investment group. The Volga Group specifically manages the consolidated assets of Gennady Timchenko, an associate of Putin who has been investigated for money laundering.

After the invasion of Crimea in 2014, the U.S. Treasury Department announced that it was placing sanctions on the Volga Group for “materially assisting, sponsoring, or providing financial, material, or technological support” to the Russian government. Steyer’s connections to the Volga Group and Timchenko, as well as Russian oil, were enough to spark a divestment campaign by college students whose university endowments invested with Steyer in 2004.

Steyer’s biography according to NextGen, the climate advocacy group he founded, does not mention Geotech Services or Russia. But even as Steyer plays coy about his own business dealings in Russia, he has called for Trump to be investigated.

Since leaving Farallon Capital, Steyer has adopted a very different opinion of energy development. Rather than helping develop oil reserves, he has become a vocal opponent of fracking.

After Trump signed an executive order allowing construction of the Keystone XL pipeline, Steyer accused the administration of putting “corporate interests ahead of American interests.”

Steyer echoed environmentalist complaints, saying that the pipeline would lead to air and water pollution while doing little to promote job growth.

“The pipelines are all risk and no reward, allowing corporate polluters to transport oil through our country to be sold on the global market, while putting our air and water at serious risk,” he said in a statement.
Ironically, Steyer’s opposition to fracking makes him an unwitting ally of Russian energy producers with whom he once worked. The Russian government relies on oil sales for much of its revenue. For several years, oil prices have remained too low for Russia’s government to get its expected funding. Although estimates vary, experts agree that Russia relies on oil and gas taxes for at least 21 percent of its budget. In January 2016, Russian finance minister Anton Siluanov said that for the Russian government’s budget to balance, oil would have to sell for at least $82 per barrel.
Oil currently is selling for around $54 per barrel.
Much of the dramatic drop in prices can be credited to North Dakota fracking. Fracking accounts for half of all American oil output, with 300,000 fracking wells churning out 4.3 million barrels per day.
Steyer’s efforts to stop domestic energy development mirror Russia’s attempts to halt the growth of American fracking. For Russia it was a case of “do as I say, not as I do.” Although hydraulic fracking has been used in Siberia for years, Russia quickly moved against the new horizontal drilling technology that allowed for fracking expansion in North America.
As early as 2014, government officials in Europe spoke out about Russian attempts to discredit fracking. Then-NATO Secretary General Anders Fogh Rasmussen told a London think tank that the Russian government was behind attempts to discredit fracking.
“I have met allies who can report that Russia, as part of their sophisticated information and disinformation operations, engaged actively with so-called non-governmental organisations – environmental organisations working against shale gas – to maintain European dependence on imported Russian gas,” said Rasmussen.
Rasmussen considered fracking an important tool to increase Europe’s energy security.
At the time, environmentalist groups took offense over the idea that they were Russian pawns.

“The idea we’re puppets of Putin is so preposterous that you have to wonder what they’re smoking over at NATO HQ,” said Greenpeace, also pointing out that several of its members had been arrested during a Russian protest.

Rasmussen wasn’t the only government official to acknowledge Russia’s role in the anti-fracking movement. According to emails released by WikiLeaks, Hillary Clinton talked about “phony environmentalist groups…funded by the Russians,” in a 2014 speech in Canada.

“We were even up against phony environmental groups, and I’m a big environmentalist, but these were funded by the Russians to stand against any effort, oh that pipeline, that fracking, that whatever will be a problem for you, and a lot of the money supporting that message was coming from Russia,” she said in the speech.

Over a period of just seven months in 2015, RT ran 62 different anti-fracking television stories and news reports, as well as an hour-long, largely discredited anti-fracking documentary. Reporters on RT routinely framed stories and interview to focus on the risks of fracking, leaving out information about the likelihood of these disasters taking place.

The propaganda push was serious enough to warrant inclusion in the Office of the Director of National Intelligence’s report about Russian interference in the U.S. election.

“RT runs anti-fracking programming, highlighting environmental issues and the impacts on public health,” the report read. “This is likely reflective of the Russian Government’s concern about the impact of fracking and U.S. natural gas production on the global energy market and the potential challenges to Gazprom’s profitability.”

In addition to funding anti-fracking broadcasts, Russia has also donated to environmental groups that are pushing to shut down domestic oil drilling. As in many deals with Russian officials, the monetary ties are shady.

According to a Senate Committee report in 2014, the Sea Change Foundation, a group formed in 2006 to fight climate change, received donations from Klein Ltd., an overseas company described as “completely lacking in transparency” with regards to its funders.

“The vast majority of Sea Change’s funding comes from a Bermuda based corporation [Klein Ltd.] that deliberately hides the source of their funds,” the report said.

A private follow-up report released the following year connected Klein to two men who had held directorship positions under Leonid Reiman, a confidant of Putin and the subject of a 2008 money-laundering case. According to the report, Klein donated more than $43 million to anti-fracking groups, including the League of Conservation Voters, the Sierra Club, and the Natural Resources Defense Council in 2014.

Sea Change is the Energy Foundation’s third-largest donor. Steyer, however, is only slightly behind. His TomKat Charitable Trust donated $4,150,000 to the same group. The Energy Foundation uses its donations to further fund a variety of environmentalist groups ranging from the Sierra Club and the Environmental Defense Fund, to the Rockefeller Family Fund and the Tides Center.

All of which is entirely legal. Still, these legal dealings bring Steyer’s environmental activism into contact with groups receiving Russian support to battle fracking. As Steyer calls for an investigation into the Trump administration’s potential relationships with Russia, he himself has had significant financial ties to the country.

Given this reality, why has Steyer chosen to continue harping on an investigation into Trump and Russia?

At the beginning of February, Steyer announced that he would be expanding the focus of his environmental political advocacy group, NextGen Climate Action, to include issues outside of climate change. In a video, Steyer asked his supporters to share ideas of ways to take on the Trump administration on a variety of issues. In fact, one aide likened his new goal to “crowdsourcing the resistance.”

Some suspect that Steyer is using NextGen to try to boost name recognition for a gubernatorial run in 2018. So far, he refuses to comment on the race. However, Steyer’s decision to expand NextGen’s focus means that criticism of the administration’s attitude towards Russia will likely continue.