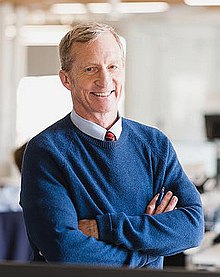 Tom Steyer: Radical Without a Cause?

Last week was a busy one for liberal billionaire Tom Steyer. Not only are the 2018 races reaching their final days, in which he is a key financial player, but Steyer was also one of the prominent liberals who received a suspicious package from the Florida bomber. And on top of that, President Trump lashed out at Steyer on Twitter on Sunday, characterizing him as “wacky” and predicting that Democrats would not support him as a presidential candidate.

“He comes off as a crazed & stumbling lunatic who should be running out of money pretty soon. As bad as their field is, if he is running for President, the Dems will eat him alive!,” Trump tweeted.

The tweet came after Steyer gave an extensive interview to CNN’s “State of the Nation,” during which he harshly criticized the president and pushed for impeachment.

“If you actually look at what Americans think, almost 80 percent of registered Democrats want this president impeached and removed from office,” he said. “If you ask Americans broadly — Democrats, Republicans and Independents — more people are in favor of that than aren’t. … What we have is a movement asking for a different America.”

Trump wasn’t the only one to criticize Steyer. House Majority Leader Kevin McCarthy also posted a tweet complaining that Steyer, along with fellow liberal billionaires George Soros and Michael Bloomberg, were trying to buy the election. McCarthy deleted the tweet after accusations that it was anti-Semitic by critics who mistakenly assumed Steyer is Jewish (His father was a non-practicing Jew and Steyer himself is an active Episcopalian.)

But Steyer’s place on the list of Republicans’ least favorite liberal donors reflects the prominent role he’s playing in national politics and the dramatic transformation of this former hedge-fund manager with major investments in carbon-heavy industries into one of America’s leading progressive activists.

Worth some $1.6 billion, Steyer earned most of his fortune running Farallon Capital, an investment firm he founded in 1986. As head of the firm, he was known for his willingness to take risks on distressed assets and volatile markets. The final decision on investments rested with Steyer, and one anonymous Farallon investor told Reuters in 2014 that his philosophy was to do “whatever it will take to make money.”

This often meant investing in fossil fuels. Steyer and Farallon poured hundreds of millions of dollars into the coal industry across Asia, helping boost mine production by 70 million tons. Another 2009 investment in an Australian mine set the project on a course to produce up to 13 million tons of coal per year for the next 30 years.

Steyer stepped down from Farallon in 2012 to focus on advocating for clean energy, divesting his own fossil fuel investments. But by that time, his carbon investments had already made him a billionaire.

Now, Steyer is using that money to reshape American politics. He founded NextGen Climate (now NextGen America) in 2013 to give the environmentalist movement both capitol and manpower.  One year later, he was America’s single largest individual campaign spender, donating some $74 million hoping to make climate change a key issue in the elections.

His efforts were largely unsuccessful. Only one of the candidates he backed in a competitive race actually won. As National Journal reported: “Tom Steyer Spent $74 million on the election. He didn’t get much to show for it.”

After the 2014 election cycle, Steyer continued to push for policies to green policies like limiting gasoline use and promoting the development of clean energy. He also continued to donate vast sums to Democratic candidates– $87 million in 2016 alone.  He toyed with running for California governor in 2016, before deciding against it. And he has openly discussed his interest in a presidential bid.

This year, he has donated more than $41 million, a sum second only to Republican moneyman Sheldon Adelson.

Steyer’s newest cause is impeachment. He launched “Need to Impeach,” a high-profile campaign to generate support for impeachment. The website, which lists what it claims are nine impeachable offenses,  has collected more than six million digital signatures and the organization has held town halls and voter registration drives in swing states like Iowa and New Hampshire. Steyer’s goal is to link the broad, national energy behind the pro-impeachment movement to local elections.

Steyer said in an interview with Rolling Stone that a populist appeal is the only way to make Republicans break ranks and vote to impeach the president.

Trump has limited his sparring with Steyer to Twitter. For the other billionaire, fighting the president and his policies has become an increasingly all-consuming task.