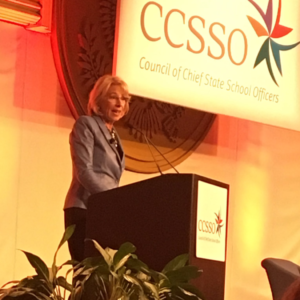 The top education officials from 48 states, the leaders of the two major teacher’s unions, influential think-tankers, and the new U.S. Secretary of Education all convened in a ballroom at the Capitol Hilton, blocks north of the White House, on Monday.

The Council of Chief State School Officers (CCSSO) arguably represents the most powerful group of education policy stakeholders in the nation. The state chiefs—most of whom are directly responsible for multi-billion dollar yearly budgets and the education of hundreds of thousands—converge in Washington every year for a legislative conference in which they compare notes and meet with national education powerbrokers.

In the United States the task of educating the nation’s youth is primarily a state responsibility. While the Bush-era No Child Left Behind reforms temporarily centralized education decision-making in Washington, the 2015 Every Student Succeed Act (ESSA) was mostly an effort in returning power to state and local levels.

The states’ role in education policy counts for “darn near everything” under ESSA, said Hanna Skandera, the top education official from New Mexico in a morning panel entitled “State Leadership in a New Federal Environment.” Skandera was reportedly a finalist for the top education post in President Trump’s cabinet.

Instead of going to Skandera, the job of U.S. Secretary of Education went to Betsy DeVos, a billionaire school-choice activist who had previously chaired Michigan’s state Republican Party. The CCSSO’s relationship with the new national education chief has had its ups and downs as the members work to navigate a new political regime in Washington.

While the CCSSO has allied with the new administration on ensuring that the devolutionary principles in ESSA are implemented, the proposed cuts to the federal education department in the administration’s “skinny budget” target key streams of educational funding used by states. Entire grant programs, like $2.25 billion in Title II funding for teacher professional development are slated for cuts. Multiple state chiefs, including some from red states, told InsideSources they oppose federal budget cuts to educational block grants.

Furthermore, while the new education secretary is expected to give states flexibility in crafting their federal accountability-compliance plans, or ESSA proposals, the unusually tense political environment that accompanied DeVos’s confirmation is not necessarily conducive to smooth sailing for the state chiefs.

Peter Zamora, CCSSO’s director of federal relations, told the conference attendees that despite having an ally of sorts at the education department’s helm, crafting their state plans is “not necessarily going to be pain free.” The state chiefs can expect increased scrutiny over their ESSA plans from lawmakers who feel the heat from an inflamed grassroots.

One key player that has been sounding the alarm over the direction of education policy is Randi Weingarten, the president of the American Federation of Teachers. Weingarten, who appeared on a panel with fellow teachers’ union leader Lily Eskelsen Garcia, said the era of bipartisanship at the federal level that brought about ESSA is over: “we’re back in war-time.”

Meanwhile, some of the other afternoon panelists opposite Garcia and Weingarten, including Michael Petrilli of the center-right Fordham Institute, downplayed the probability that Republicans are going to ram substantive education policy changes through Congress. Petrilli urged the state chiefs to ignore the noise coming out of Washington, predicting that those debates will mostly consist of “political theater.”

Similarly, Zamora, who is the CCSSO’s federal advocacy point-man, sought to calm the attendees on President Trump’s opening budget proposal. He reminded the state chiefs “the administration does not have the power of the purse,” and the skinny budget actually represents the “starting point of the process.” Some of Trump’s allies on the right have criticized some of the budget’s proposed cuts, including the elimination of federal funding for some after-school programs.

Zamora and the state chiefs are also waiting to see what kinds of school choice initiatives might come out of Republican controlled Congress. He noted that while some federal choice proposals have been introduced, it is unclear if any will emerge that “have legs.” Depending on what form school choice legislation takes, some are concerned that public funds could be diverted from traditional public schools to public charters or private schools.

On balance, however, Zamora said that he believes “states are well positioned to lead” in the current federal environment. That theme, of waxing state education power, was a leitmotif of nearly all of the day’s sessions.

“It is in your hands,” summed up Petrilli to the state-level leaders. “You’ve got a lot of responsibility.”

The day’s public sessions concluded with a speech by DeVos, followed with a short question and answer session between the Education Secretary and the CCSSO’s executive director, Chris Minnich. DeVos mostly stuck to her talking points—reiterating her support of school choice, her emphasis on cutting fat from the education department budget, and her commitment to federalism in education policy.

Following her remarks, DeVos was slated to attend a private round-table with the state chiefs. On Tuesday, the state chiefs are headed to Capitol Hill to meet with top lawmakers. The president’s budget and ESSA implementation are likely to feature prominently in each of those meetings.