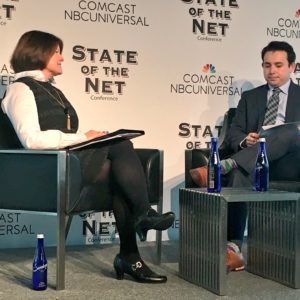 The likely Republican leader of a top federal regulator said Trump-style dealmaking will influence how she leads the Federal Trade Commission on issues like rolling back regulations and reclaiming net neutrality, privacy, and other authorities from the Federal Communications Commission.

Republican FTC Commissioner Maureen Ohlhausen quoted from President Donald Trump’s “The Art of the Deal” while addressing the 2017 State of the Net conference in Washington Monday, saying deals between Republicans and Democrats will be necessary on the evenly split commission until Trump appoints more commissioners.

“I thought maybe I should take a look at Trump’s ‘Art of the Deal’ to get some ideas, and one of them is basically ‘maximize your options and use your leverage,'” Ohlhausen said. “So as an acting chair, if I were to be named that, there are definitely things I could do.”

Ohlhausen and Democratic Commissioner Terrell McSweeny will be the only commissioners left at the FTC after Chairwoman Edith Ramirez, former President Barack Obama’s pick to lead the agency, steps down in February. Ohlhausen said she would direct the agency, primarily charged with enforcing consumer protection law, to look for “substantial harm” in cases, rather than practices by companies that only show the potential for harm.

Too much of the former defined the previous administration and thereby hurt innovation, according to Ohlhausen.

“I would hope my remaining colleague Commissioner McSweeny would of course want to act on those kinds of cases,” the Republican said. “Starting a dialogue about substantial harm, that doesn’t require a commission vote.”

The FTC would need a majority vote to wind back charges its already filed in cases where Ohlhausen dissented, including recent enforcement actions against Uber for exaggerating driver wages and smartphone chip maker Qualcomm for violating antitrust law.

While the commissioner wouldn’t confirm reports she’s been tapped by Trump to lead the FTC at least temporarily, she expressed support for his regulatory agenda including transferring consumer protection and competition authority like net neutrality from the FCC to the FTC.

The FTC oversaw internet service providers (ISP) and their privacy practices before the FCC adopted its net neutrality and ISP privacy rules in 2015 and 2016. Ohlhausen wants them back under FTC jurisdiction, as do the Republican commissioners now in charge of the FCC.

Further complicating the jurisdiction issue is a recent ruling out of the Ninth Circuit Court of Appeals, which bars the FTC from taking action against any company acting as a common carrier — the public utility designation the FCC used to reclassify ISPs to justify net neutrality.

“Should the FCC rescind the Open Internet Order and put the lines back where they were previously, because of the Ninth Circuit decision that’s still a problem for the FTC and for consumers because this would impact not just the telecommunications space,” Ohlhausen said.

The FTC can’t oversee common carriers according to federal law — a statute Ohlhausen, her predecessor, and many others have advocated repealing. Failing to do so could leave companies like Google, the web’s targeted advertising giant, free from privacy regulation because it also acts as a service provider via Google Fiber.

“It was put in place at a time when common carriers were pervasively regulated monopolies,” she said. “Obviously our telecommunications space is vastly different than it was when these rules were put in place.”

The FTC could better police net neutrality concerns like web traffic throttling and user privacy with its antitrust and consumer protection authority, according to Ohlhausen, but said it’s up to the FCC whether to repeal or merely not enforce net neutrality.

“I look forward to working with my FCC colleagues on those topics,” she said.