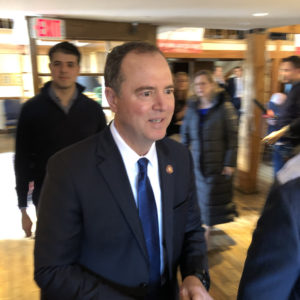 Rep Adam Schiff at the Politics and Eggs event in Bedford, NH on February 4, 2019.
News

Top Intel Democrat: Trump, Not Russia, Is Biggest Threat to Our Democracy

At a New Hampshire political event known as a launching pad for presidential bids, California Rep. Adam Schiff shot down the notion that he would run for president, while taking shots of his own and what he called “the greatest threat to our Republic and its democracy today”– the Trump presidency.

Schiff, who took over as chairman of the powerful House Permanent Select Committee on Intelligence when Democrats won control of Congress last year, told the audience of Granite State business leaders and political activists that “one of the most difficult conclusions for me in the last two years as I looked into Russia’s meddling in our affairs, as well as the growing trend towards autocracy around the world, is the realization that the threat to our democracy right now is most pronounced from within.”

“We have a deeply unethical President who is not committed to these institutions of our democracy, and a Congress that in the last two years has been utterly unwilling to stand up to him.  This combination has our republic and its democracy trembling. Trembling,” Schiff said.

In an interview with InsideSources after the speech, Schiff stood by his remarks.

“What I am saying is that the most acute threat to our democracy right now comes from an administration that believes that you [the press] are the enemy of the people. That belittles the independence of our judges, and denigrates the Justice Department and undermines the work of the FBI, and tells friend and foe alike that our intelligence agencies can’t be trusted.  This is a real threat to our country.

“That doesn’t mean that the other threats are also not serious. They are,” Schiff said. “Russia and China are trying to push forward their authoritarian models and really challenging the idea of democracy.

“But that is, I think, secondary to the threat we face right now from within” from the Trump presidency, Schiff said.

The California Democrat also issued a threat of his own, telling President Trump and his Attorney General nominee William Barr that there would be consequences if they attempt to keep the full Mueller report on his Russia investigation from being released.  Noting that in his CBS interview President Trump wouldn’t commit to releasing the report in its entirety, Schiff warned:

“If the Justice Department and our administration somehow tries to block a publication of the report, we will issue a subpoena. This is too big to be buried. This is of too great consequences to the country to be swept under the rug, and so we will use whatever compulsion we can and must to make sure that the public gets the whole story.”

Schiff also said that, if President Trump issues a national emergency in order to fund his proposed border wall,  he expects the Congress to respond immediately and aggressively.

“Our [House Democratic] leadership will make the decision, but I would imagine that we will have a legislative response, whether that is initially a resolution of disapproval of some kind, followed by legislation that will set limits on the circumstances which [a sitting president] can declare an emergency.

“There will be a legislative answer and it will test how serious Sen. Mitch McConnell is when he warned the president that he would lose Republican colleagues,” Schiff said.

Despite the campaign-style swing through New Hampshire – the Politics and Eggs event is a must-stop on the POTUS primary campaign trail – Schiff repeatedly said that he isn’t a candidate for 2020. However, Professor Andrew Smith of the University of New Hampshire was in the audience, and he noted that Schiff’s stump speech could still be a smart way to campaign for a high-profile position in a future Democratic administration.

“Typically in the presidential season, candidates will campaign who don’t have a chance of winning because they tend to ‘fall up.’ You can get a job in an administration going forward. So Rep. Schiff could definitely get something out of this.”

As for the 2020 campaign, Schiff said he is staying out of it for the moment. One fellow Californian, Sen. Kamala Harris, is already an announced candidate while another, fellow Congressman Eric Swalwell, has made several visits to New Hampshire and is scheduled to also address a Politics and Eggs forum at the end of February.

“I think Senator Harris has had a tremendous rollout.  She’s very bright.  She’s very capable,” Schiff said. “But I’m going to allow some time to go by before I make a decision about any of the candidates because most of them have never run for president before. It’s a big undertaking.  So I’m going to reserve judgment.”