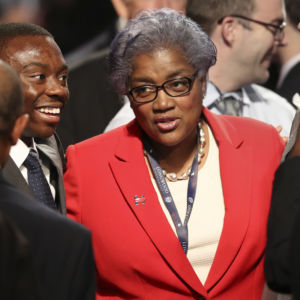 National unions have made significant contributions, in what they claim are nonpolitical expenses, toward a consulting firm run by the current Democratic Party chairwoman.

Donna Brazile has held several positions while serving within the Democratic National Committee (DNC). She is currently serving as interim chairwoman for the second time. But as Brazile served in these overtly partisan roles, labor unions have given what they claim are nonpolitical contributions to her consulting firm Brazile and Associates.

The American Federation of Teachers (AFT) is one of the more generous union contributors to the consulting firm. The union gave a $100,000 nonpolitical contribution for general overhead expenses in 2015. It gave an additional $110,000 the next year but marked it as political around the time Brazile was appointed interim chairwoman.

Brazile and Associates specializes in diversity training, crisis management and media strategies, and the firm’s website seems to indicate its work is explicitly political. Her consulting firm also started to receive a lot more money from labor going into the current election. The AFT did not exceed $15,000 in previous contributions. Elections count as political spending under federal law.

Union political and nonpolitical spending is a critically important distinction. Nowhere in the country can a worker be forced to provide money to a political cause. A worker within an unionized workplace can petition to pay a nonpolitical fair-share fee instead of full union dues. That fee can only cover the cost of representation.

The AFT is not the only union to have made contributions marked nonpolitical to Brazile and Associates. The Teamsters contributed $7,622 for nonpolitical union administration costs in 2013. The United Auto Workers (UAW) gave $5,036 for nonpolitical representational activities in 2011.

The U.S. Supreme Court first provided the fair-share option in the 1988 case Communications Workers of America v. Beck. The court at the time determined it was unlawful to force a worker to fund union political causes. It did find, however, that unions have a right to require dues that cover representation and overhead costs.

The fair-share fee in itself has also received plenty of criticism. Workers in an organized bargaining unit must still fund the union whether they support it or not — unless they are in a right-to-work state. Right-to-work outlaws mandatory union dues or fees as a condition of employment.

It can be burdensome for some workers to be approved to pay the fair-share fee. Often it requires workers to write a letter expressing their intent to stop paying full dues. Each union, however, has their own requirements. Unions have been known to sometimes just ignore or lose requests.

The Labor-Management Reporting and Disclosure Act (LMRDA) regulates the internal affairs within unions. The labor disclosure act requires labor groups to disclose their organizing and financial activities. The law ensures membership and law enforcement know where union dues are going.

The law was enacted in 1959 in response to congressional scrutiny over union corruption and racketeering. It further strengthened earlier congressional action to rein in unions through the Taft–Hartley Act of 1947.  Labor unions had become very powerful in part due to the Wagner Act of 1935.

Brazile and Associates could not be reached for further comment. Additionally, the DNC and labor unions did not respond to a request for comment by InsideSources.