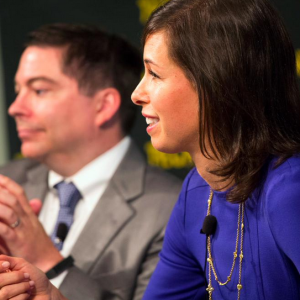 President Donald Trump has renominated former Federal Communications Commissioner Jessica Rosenworcel, a Democrat and net neutrality supporter, to take one of the two open spots at the agency in a move applauded by the broadband industry and consumer groups alike.

Rosenworcel was nominated by former President Barack Obama in 2011 and began her term in May 2012. Despite support from both Republicans and Democrats, her reconfirmation was held up in the Senate in part due to then-FCC Chairman Tom Wheeler’s reluctance to give Republicans a firm departure date following Trump’s election win. Some speculated Wheeler would stay on through the end of his term to block Trump’s ability to appoint a Republican majority at the agency.

Despite Wheeler’s December pledge to step down immediately in exchange for Rosenworcel’s renomination, Republicans in the Senate allowed her term to expire. Until Tuesday night Trump had yet to nominate anyone to fill the two open seats on the FCC — one Democrat and Republican each. In the interim, Republican Commissioners Ajit Pai and Michael O’Rielly have rolled out an aggressive agenda to scale back Democratic policies including net neutrality. Rosenworcel voted in favor of the net neutrality rules in 2015.

Speculation rose last month Commissioner Mignon Clyburn, the only Democrat left at the agency and the only one to vote for the net neutrality rules in 2015, may step down before the FCC votes to dramatically weaken those rules later this year. Her departure would leave the FCC without the quorum necessary to conduct major business (though some have quoted agency analysts saying Chairman Pai could use “obscure procedural tactics” to conduct business). Clyburn’s five-year term ends in June.

That’s one possible reason for Rosenworcel’s nomination, since Trump wouldn’t want to tie the agency’s hands with a 2-2 majority that would block Republicans from repealing net neutrality rules. But a Republican nomination may also be imminent according to Radio World, which recently reported a Trump administration source saying “the White House essentially said that Republican seat was Pai’s to recommend.” Pai is reportedly considering Brendan Carr, currently the acting FCC general counsel and a former staffer in Pai’s office.

Senate Republicans may wait for Rosenworcel’s Republican counterpart to be nominated before considering her.

Pai welcomed Rosenworcel back to the FCC Wednesday.

“I congratulate Jessica Rosenworcel on the announcement that President Trump will nominate her to serve another term on the Federal Communications Commission,” the agency chief said. “She has a distinguished record of public service, including the four-and-a-half years we worked together at this agency, and I look forward to working with her once again to advance the public interest.”

“We congratulate Jessica Rosenworcel and look forward to working closely to promote competition and fairness to all Americans,” the group’s president, Gene Kimmelman, said Wednesday. “At a time when we face enormous challenges to prevent the FCC from undermining fundamental consumer protections, we are pleased that Senate Minority Leader Schumer and his colleagues indicate a commitment to fight for competition, protecting consumers’ pocketbooks and consumers’ rights by promoting nominees who will support our cause.”

Broadband and cable lobbyists including the premier cable trade group NCTA, whose members include Comcast and Fox, congratulated Rosenworcel.

“During her first term as Commissioner, Jessica proved to be an outstanding public servant who championed policies that enable American consumers to benefit from the tremendous changes taking place in the communications and technology marketplace,” NCTA President Michael Powell said. “We share Jessica’s passion for promoting policies that close the digital divide and ensure that all Americans, especially students, have access to the many benefits that the internet offers.”

“I publicly supported Commissioner Rosenworcel’s confirmation last Congress, and I continue to appreciate her service,” Thune said last year. His committee eventually confirmed Rosenworcel, but never made it to the Senate floor for a chamber-wide vote.

Rosenworcel supported the majority of Wheeler’s Democratic agenda, but she parted ways with her majority last fall when the FCC sought to rewrite the rules of the cable set-top box market, which would have allowed third-parties to build boxes to compete with those rented to subscribers by cable companies. The proposal gave the FCC power over licensing agreements between cable providers and the third-party device manufacturers they would have to offer their content on — a provision Rosenworcel disagreed with.

Her no-vote kept Wheeler from advancing the proposal, angering congressional Democrats and giving her some support from Republicans in the midst of her renomination fight. Democrat Sens. Ed Markey of Massachusetts and Ron Wyden of Oregon said they put a hold on Rosenworcel’s renomination after her no vote, but quickly retracted it.